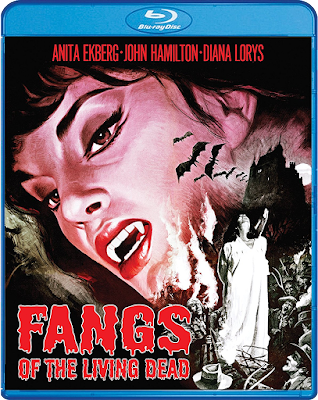 I have seen a handful of Paul Naschy's werewolf flicks, several of Juan Piquer Simon's films (e.g. PIECES and SLUGS), and all of Ossorio's BLIND DEAD movies, but I'm still very much a novice when it comes to Spanish horror Vault Dwellers! Therefore, it is almost imperative for me to pick up a copy of FANGS OF THE LIVING DEAD so that I can further broaden my Horror horizons!

Synopsis: Beautiful fashion model Sylvia Morel (Anita Ekberg) receives news that she has inherited a castle from her uncle. Her curiosity leads her to journey to a remote village to see her new house. Once there, she learns of her family's history and soon falls under the spell of her uncle. He wants her to become the new matriarch of the family … a clan of vampires! This chilling tale of bloodsuckers was directed by Spanish horror director Amando de Ossorio (THE LORELEY'S GRASP, NIGHT OF THE SORCERERS, THE BLIND DEAD series).

Extras:
FANGS OF THE LIVING DEAD is now available on Blu-ray from Scream Factory, and costs between $18 - $23! You can order a copy now from AMAZON, BULLMOOSE, DIABOLIK DVD, or directly from SHOUT! FACTORY.