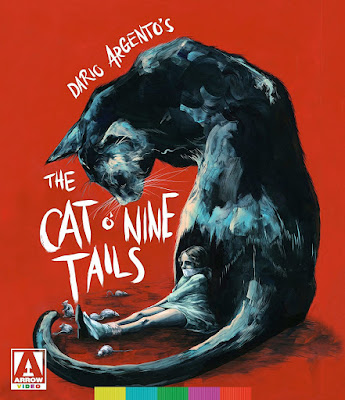 Continuing their ongoing streak of excellence, Arrow Video released their long-delayed 2-Disc Limited Edition of CAT O' NINE TAILS back on March 6th! Along with their Blu-ray of BIRD WITH THE CRYSTAL PLUMAGE (available in Limited and Special Editions), Arrow need only release FOUR FLIES ON GREY VELVET to complete the "Animal Trilogy."

Synopsis: Following the success of his debut feature, THE BIRD WITH THE CRYSTAL PLUMAGE, distributor Titanus tasked writer/director Dario Argento with delivering a follow-up in short order. The resulting film, granted a greatly enhanced budget and heralded in its US marketing campaign as ''nine times more suspenseful'' than its predecessor, was THE CAT O' NINE TAILS.

When a break-in occurs at a secretive genetics institute, blind puzzle-maker Franco Arno (Karl Malden - PATTON, ONE-EYED JACKS), who overheard an attempt to blackmail one of the institute's scientists shortly before the robbery, teams up with intrepid reporter Carlo Giordani (James Franciscus - THE VALLEY OF GWANGI, BENEATH THE PLANET OF THE APES) to crack the case. But before long the bodies begin to pile up and the two amateur sleuths find their own lives imperiled in their search for the truth. And worse still, Lori (Cinzia De Carolis - CANNIBAL APOCALYPSE), Franco's young niece, may also be in the killer's sights…

This second entry in the so-called ''Animal Trilogy'' found Argento further refining his distinctive style and cementing his reputation as the master of the giallo thriller. Co-starring Catherine Spaak (IL SORPASSO) and Rada Rassimov (BARON BLOOD), and featuring another nerve-jangling score by Academy Award Winner Ennio Morricone (THE HATEFUL EIGHT, THE BIRD WITH THE CRYSTAL PLUMAGE, Sergio Leone's "Man with No Name" Trilogy), THE CAT O' NINE TAILS remains one of Argento's most suspenseful and underrated films.

Extras:
Arrow Video's Limited Edition of THE CAT O' NINE TAILS is currently available wherever Blu-ray discs are sold! This title is going for $40 - $50 at the moment, but if that's too rich your blood, a cheaper Special Edition will most likely be issued later this year. For those of you that simply must have the absolute best of everything, get yourself a copy of THE CAT O' NINE TAILS now at AMAZON, BULLMOOSE, or DIABOLIK DVD!