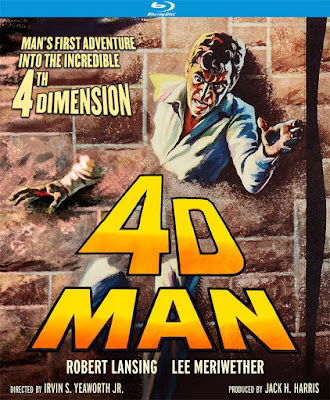 MAD SCIENCE, DUELING LEGENDS, AND PREHISTORIC MONSTERS ARE ON THE MENU IN KINO LORBER'S LATEST TRIO OF BLU-RAY RELEASES!

I've gotta admit that Kino Lorber has really been doing a stellar job of bringing overlooked, unknown, and forgotten classics to Blu-ray over the past several years! And their latest batch of new Blu-ray titles is no exception! I've never seen 4D MAN, but it sounds like a great supervillain origin story, while BILLY THE KID VS. DRACULA was something I watched (and typically snoozed through) on late night TV when I was a kid! And DINOSAURUS! has long been a favorite "dinosaur on the loose" flick of mine so naturally I'm super stoked to upgrade from my old Image DVD of the film! Let's take a closer look at these three new Kino titles, shall we?

Synopsis: Two brothers, scientists Scott and Tony Nelson, develop an amplifier which enables a person to enter a 4th dimensional state, allowing him to pass through any object. Scott experiments on himself and discovers that each time he passes through something he ages rapidly. He begins killing people, sucking out their life energies and regaining his youth as a result. It falls to Tony and Scott's girlfriend, Linda, to try to put a stop to his murderous rampage.

Extras:
Kino's Special Edition of 4D MAN is now available wherever Blu-rays are sold, and should cost you between $18 - $20! Add this newly restored sci-fi thriller now by picking up a copy from AMAZON, BULL MOOSE, DIABOLIK DVD, or directly from KINO LORBER's online store! 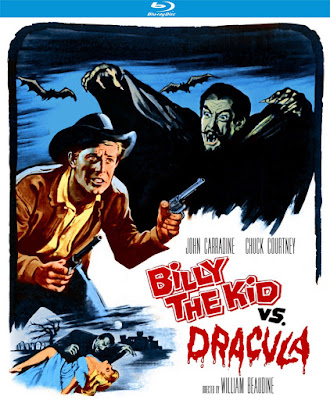 Traveling by stagecoach, Dracula (the great John Carradine) plots to convert Billy the Kid's (famed stuntman Chuck Courtney) fiancée, Betty Bentley (Melinda Casey), into his vampire bride. When the sinister bloodsucker kidnaps Betty and takes her to an abandoned silver mine, Billy must confront the Count, but soon realizes his six-shooters' bullets are no match for the undead—and an all-out battle of good vs. evil ensues.

Filmmaker Carl K. Hittleman (36 HOURS) wrote the screenplay for this wild cult classic, beautifully shot by Lothrop B. Worth (GOG) and featuring Marjorie Bennett (WHAT EVER HAPPENED TO BABY JANE?) and Harry Carey Jr. (CHERRY 2000).

Extras:
BILLY THE KID VS. DRACULA is now available and should cost between $15 - $20! See it for the first time, or relive your childhood memories by snapping up a copy today from AMAZON, BULL MOOSE, DIABOLIK DVD, or directly from KINO LORBER! 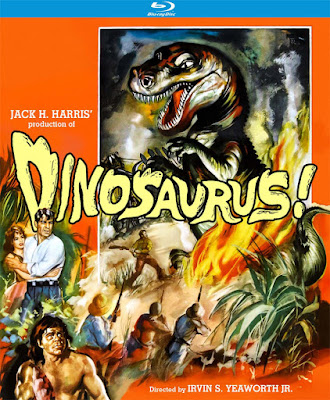 Building a new harbor off the coast of a Caribbean island, an American engineer (Ramsey) sets off a blast on the ocean floor that uncovers the frozen bodies of a Brontosaurus, a Tyrannosaurus Rex and a Neanderthal Man. The dinosaurs are hauled ashore by the construction crew, who are unaware that the giants are still alive. Struck by lightning during a fierce tropical storm, the monsters awaken and prowl the island jungles!

Also restored to life is the caveman (Gregg Martell), an amiable brute who joins the island boy Julio (Alan Roberts) in a series of wacky misadventures. A merry grab-bag of sci-fi, action and comedy, Dinosaurus! features stop-motion dinosaur animation by the legendary Projects Unlimited effects team (THE TIME MACHINE, The Outer Limits). Beautifully shot in Scope by the great Stanley Cortez (SINCE YOU WENT AWAY, THE NIGHT OF THE HUNTER).

Extras:
DINOSAURUS! is definitely a must-have for yours truly (especially now that it's gotten a 4K makeover!) - it is super cool to see it getting some love after being out of print for so many years! This film is now available on Blu-ray (and DVD!) and should cost between $18 - $20! Get yourself a copy of this fun dinosaur romp now from AMAZON, BULL MOOSE, DIABOLIK DVD, or KINO LORBER!