Journey to a FORBIDDEN WORLD in a GALAXY OF TERROR or Join the VICE SQUAD with Scream Factory's Newest Releases! 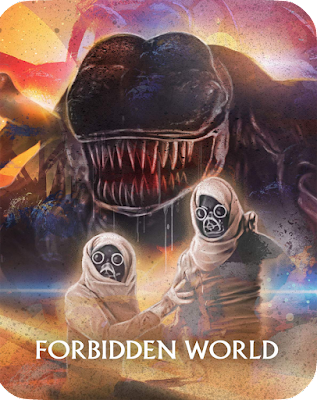 The worst part of being a collector of physical media is that there is always a better version of something you already own just around the corner. Case in point, Scream Factory's two latest Limited Edition Steelbook offerings of FORBIDDEN WORLD and GALAXY OF TERROR.

While some previous Scream steelbooks have included some new extras, these discs only offer up new 4K scans (2K in the case of FORBIDDEN WORLD'S Director's Cut!) of the films. If you're not in the mood to upgrade from what you already have, Scream Factory also dropped VICE SQUAD onto Blu-ray today with a new 4K restoration and tons of new extras!

Not sure about adding these new releases to your collection? Then let's take a closer look!

Synopsis: The seed is planted ... the nightmare grows. On planet Xarbia, an experimental life form known as "Subject 20" has been created by an elite group of scientists in hopes of preventing a major galactic food crisis. However, instead of prolonging life, Subject 20 is destroying it, and the organism poses a double threat because it constantly changes its genetic structure. Mike Colby, a bounty hunter, is called in to investigate. Suspecting that the scientists are keeping something from him, Colby soon discovers why ...

Extras:
I'm not a gigantic fan of FORBIDDEN WORLD personally, BUT if I was I would snap this release up in a heartbeat. The new packing has gorgeous artwork, and though there aren't any new extras, the new transfers alone would be worth the upgrade in my eyes. If you feel the urge to double-dip on this one (which will cost you about $20), get it now from AMAZON, BULL MOOSE, DIABOLIK DVD, or directly from SHOUT! FACTORY, which will also get you a rolled lithograph of the new steelbook artwork. (While supplies last of course!) 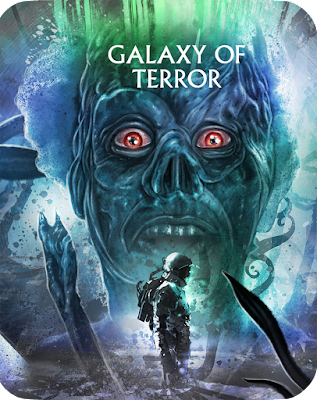 Synopsis: The mind's innermost fears become reality for the crew members of the Quest when they land on a barren planet to rescue survivors from the starship Remus. The crew investigates a giant pyramid on the planet, hoping to find the missing crew members ... only to find something deadly waiting for them instead.

Each crew member must come face to face with their darkest fears or perish. The crew of the Quest includes Edward Albert (THE HOUSE WHERE EVIL DWELLS), Erin Moran (Happy Days), Ray Walston (POPCORN), Robert Englund (the A NIGHTMARE ON ELM STREET series), Zalman King (BLUE SUNSHINE), and Sid Haig (THE DEVIL'S REJECTS).

The film had its share of new, emerging talents behind the camera as well, including James Cameron, who did the production design, and Bill Paxton, who worked as a set decorator.

Extras:
Much like FORBIDDEN WORLD this release only offers up a new 4K scan, plus beautiful new packaging. If you feel that it is worth the $20 double-dip, then by all means make the upgrade now! You can get GALAXY OF TERROR's new Limited Edition steelbook from AMAZON, BULL MOOSE, DIABOLIK DVD, or directly from SHOUT! FACTORY (which also comes with a rolled lithograph while supplies last). 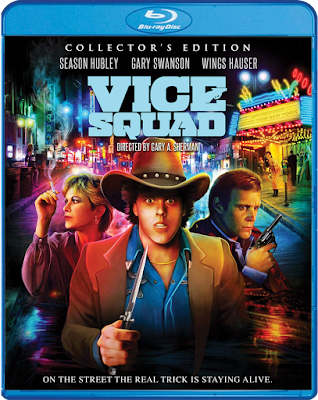 Synopsis: Season Hubley (Hardcore) stars as Princess, a single mom by day, a Hollywood prostitute by night. A volatile cop, Tom Walsh (Gary Swanson - THE GUARDIAN) uses her to trap a sadistic pimp named Ramrod (Wings Hauser - MUTANT), who murdered one of her friends.

But when Ramrod escapes police custody, Princess is in grave danger. No matter which way she turns, Ramrod is coming for her. Walsh and the entire police force are out looking to catch him. Tonight, the neon slime will be on full display and the city of Los Angeles will explode with furious vengeance and violence!
Disc Specs:
Rated R | Color | 97 minutes | Region A
Video - 1080p Widescreen (1.85:1)
Audio - English: DTS-HD Master Audio 2.0

Extras:
Scream Factory's new Collector's Edition of VICE SQUAD is $25 - $30, and available wherever discs are sold! Get a copy now at AMAZON, BULL MOOSE, DIABOLIK DVD, or directly from SHOUT! FACTORY, which will also net you a limited edition poster!