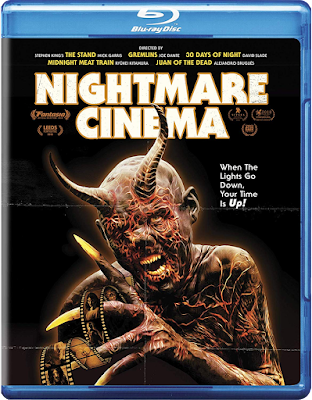 I've probably said this before in a previous post, but I am a huge sucker for Horror anthologies - It just feels like you're getting more bang for your buck! And what really caught my eye with NIGHTMARE CINEMA (other than Mickey Rourke as "The Projectionist") is the talent behind the camera!

Joe Dante (GREMLINS, THE HOWLING, THE 'BURBS), Mick Garris (CRITTERS 2, PSYCHO IV, RIDING THE BULLET), Ryuhei Kitamura (GODZILLA: FINAL WARS, VERSUS, MIDNIGHT MEAT TRAIN), Alejandro Brugues (JUAN OF THE DEAD, From Dusk Till Dawn: The Series), and David Slade (30 DAYS OF NIGHT, HARD CANDY, Hannibal) all contributed a segment to this new anthology and that simply means that I MUST SEE IT!

Synopsis: In this twisted horror anthology, five strangers are drawn to an abandoned theater and forced to watch their deepest and darkest fears play out before them. Lurking in the shadows is the Projectionist (Rourke), who preys upon their souls with his collection of disturbing films. As each reel spins its sinister tale, the characters find frightening parallels to their own lives.

Extras:
NIGHTMARE CINEMA comes to DVD & Blu-ray on Tuesday, September 3rd, and is relatively cheap: It should only cost between $12 - $14! Though it appears to be a bare bones disc, the price is right and word on the street is that it is actually pretty decent. However, if you're still on the fence then watch the trailer below. If that convinces you, order a copy of NIGHTMARE CINEMA today from AMAZON, BULL MOOSE, or DIABOLIK DVD!