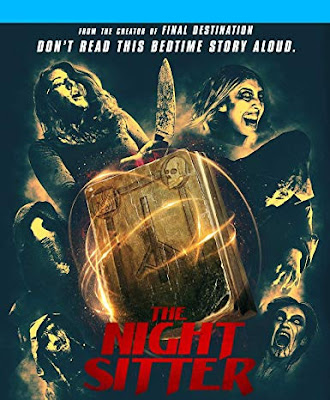 WITCHES WILL GIVE YOU STITCHES IN ABIEL BRUHN AND JOHN ROCCO'S FEATURE LENGTH DIRECTORIAL DEBUT!

After a successful Kickstarter campaign helped fund completion of THE NIGHT SITTER, the film eventually worked it's way into several film festivals in 2018 before finally getting picked up for distribution by Uncork'd Entertainment this year! I've heard a lot of positive buzz about this one and aim to check it out in the near future, especially since these guys were inspired by filmmakers like Dario Argento, Brian Yuzna, and Stuart Gordon!

Synopsis: A scheming con artist (Elyse DuFour - The Walking Dead) poses as "Amber," an innocent babysitter, to steal from Ted Hooper, a wealthy occult enthusiast with a reclusive son named Kevin. Her crew arrives to clean out the house just as Kevin stumbles upon one of his father's most prized artifacts and unwittingly summons a trio of witches known as "The Three Mothers." (A definite Argento nod.) As the playful, sadistic witches start picking people off, Amber and Kevin form an unlikely bond and try to survive the night together.

Extras:
THE NIGHT SITTER is currently available on DVD and VOD, but if you're holding out for the Blu-ray disc, you can get your paws on it on Tuesday, September 3, 2019 for $17.99! Support independent cinema and order a copy now from AMAZON!