Spectral Stompers & Graveyard Ghouls are Coming to Vinyl in October! 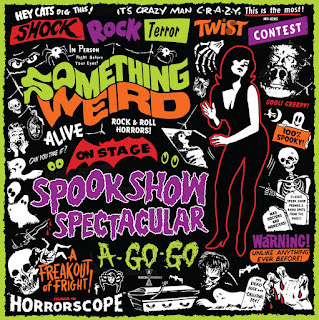 The strange, yet magnificent alliance between Something Weird Video and Modern Harmonic continues with a super cool new LP release of the SPOOK SHOW SPECTACULAR A-GO-GO! I remember way back in the day when I had Something Weird's VHS release of MONSTERS CRASH THE PAJAMA PARTY: SPOOK SHOW SPECTACULAR (long since donated after I abandoned the VHS format) so I feel a little tug of nostalgia as I post about this new LP. If you enjoy cinematic oddities and collect records, then this might just be up your alley! Keep reading to see what this groovy LP/DVD combo offers up!

About This Release: From the 1930s until the 1970s a popular form of entertainment, quaintly called, The Ghost (or Spook) Show, enthralled America. Traveling magicians and illusionists went on the road and added horror elements to their regular (often predictable) stage acts. This appealed to youngsters eager for cheap thrills and chills. The advertising campaigns promised to “scare the yell” out of those “brave” enough to attend, and performances took place mostly at midnight in movie theatres that were decorated with outrageous lobby displays publicizing the shocking and scary things about to be seen - ghosts, ghouls, monsters, gorillas, mad doctors, and some things “so terrifying” that they couldn’t even be mentioned. During the course of the night, classic horror movies were shown, and there were contests with corny gimmicks and silly prizes. 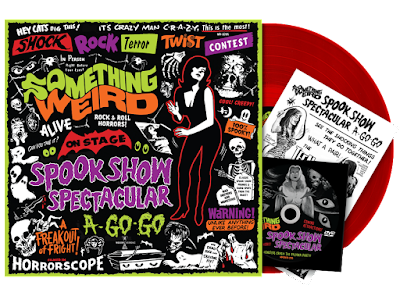 How does Something Weird fit in? Well, during 2001 SWV compiled what was to become one of their most popular and beloved DVDs, MONSTERS CRASH THE PAJAMA PARTY - SPOOK SHOW SPECTACULAR. It featured over three hours of rare Ghost Show shorts and trailers, radio spot audio, galleries of memorabilia, and commentaries with legendary living Ghostmasters. The folks at SWV were huge Spook Show fans and collected anything related to the subject including original 35mm film trailers as well as radio spots on promotional 45s and magnetic tape. So this was a dream project for them, and something near and dear to their bloody hearts.

Since its release, audio bits from the MCTPPSSS have popped up on radio stations and music compilations. People love them. So it just seemed logical that Something Weird do a Spook Show album. And like our old pal, Jim “The Mad Doctor” Ridenour, we’ve always believed that horror and rock ‘n roll go hand in hand, so what better way than to combine some rarely heard, fiendish surf and garage rock instrumentals with the trailer & radio spot audio and incidental music from the DVD? Now all groovy ghouls and goblins can time travel and have a Spook Show A Go-Go Party! (Just add your own ghosts and gorilla suits...) 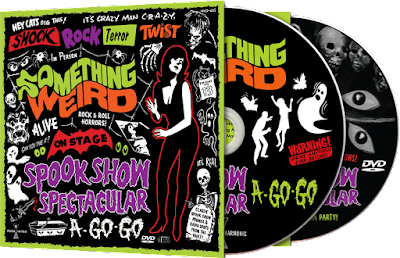 About the DVD: Grab the kids, lower the lights, and turn every night into Halloween with the Monsters Crash the Pajama Party Spook Show Spectacular! It's a Spookaroo Whoop-de-doo with this Terrorific 3-hour-plus Spooktacular containing everything you need for your very own Spook Party!

First, join some terrified teens who spend a night in a haunted house and get spooked by a mad doctor and his ghoulish gang when the MONSTER CRASH THE PAJAMA PARTY, a hilarious 1965 theatrical featurette complete with werewolf, gorilla in a fur coat, and goofy gimmick! Then, feel your eyes pop out of their sockets when you check into The Asylum of the Insane, a startling short subject with monsters in 3-D Spookarama!

But that's not all! This scary, screwy, chill-arious fright show includes bonus shorts, Spook Show previews, audio commentaries, How to Put on Your Own Spook Show, music by The Dead Elvi, and much more--plus the bonus feature-length chiller-diller TORMENTED!


The SPOOK SHOW SPECTACULAR A-GO-GO LP + DVD Combo will be released on Friday, October 25th and should cost you between $23 - $25! (The CD + DVD combo version is priced between $17 - $19!) You can pre-order now from AMAZON, directly from MODERN HARMONIC, or from SUNDAZED MUSIC!