The Future of Law Enforcement is Back: Arrow Video Gives ROBOCOP a Definitive Blu-ray Release This Holiday Season! 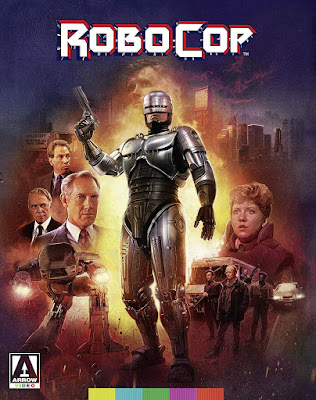 ON NOVEMBER 26TH, GIVE THE GIFT OF ROBOCOP TO YOURSELF WITH ARROW VIDEO'S FANTASTIC NEW LIMITED EDITION AND STEELBOOK RELEASES!

Verhoeven's ROBOCOP occupies a top spot in my list of all-time favorite films, and it's one of the few titles I've repurchased on multiple formats because I love this film so much and feel compelled to own the very best version available! And now that version is here! Arrow Video recently unveiled their Steelbook and Limited Edition of ROBOCOP and I gotta say... until an extras-packed 4K UHD release comes out, this is the be all, end all release of a film that is still ridiculously relevant today, as it was over thirty years ago! Now brace yourself Robo-Fans because it's time to dive into the specs and extras for this must-have release!

Synopsis: RoboCop marked director Paul Verhoeven’s (FLESH + BLOOD, STARSHIP TROOPERS, TOTAL RECALL) Hollywood debut and instantly became an enduring sci-fi/action classic when it landed in theaters in the summer of 1987. Verhoeven’s peerlessly exciting and kinetic visuals were matched by a sharp script, iconic cast and exceptional special effects by Rob Bottin (THE THING) and Phil Tippett (THE EMPIRE STRIKES BACK).

The film takes place in Detroit in the not-too-distant future. Heroic cop Alex Murphy (Peter Weller - OF UNKNOWN ORIGIN, LEVIATHAN, BUCKAROO BANZAI: ACROSS THE 8TH DIMENSION) is gunned down in the line of duty, only to be resurrected as RoboCop – a cybernetic mix of spare human parts and Motor City steel, and the latest defense against crime designed by the all-powerful OCP Corporation. As RoboCop’s memories of his former life as Murphy resurface, only his ex-partner (Nancy Allen - ROBOCOP 2, ROBOCOP 3, DRESSED TO KILL) stands beside him to fight against the vicious thugs responsible for his death, as well as a nefarious top-level OCP executive orchestrating the chaos from above. 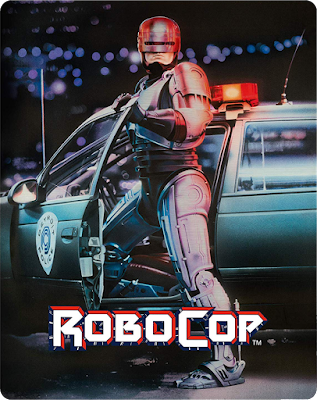 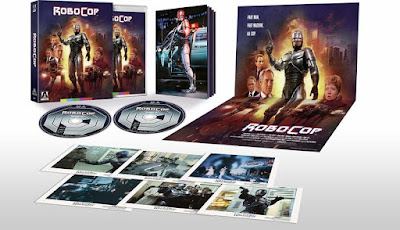 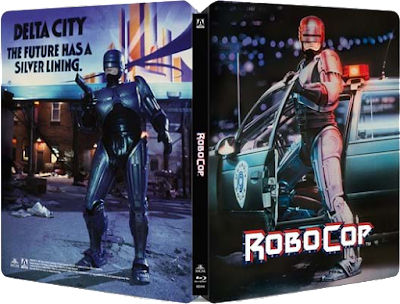 
OH. MY. GOD! Honestly, mere weeks ago, yours truly was (foolishly) stating that Arrow couldn't possibly make me buy this film again, but boy was I wrong! Though it appears that they are using the same 4K restoration that MGM did back in 2013, Arrow is including THREE audio options, THREE cuts of the film, all of the previous featurettes from MGM's last release, and (as you've already seen) tons of new special features exclusive to both the Limited Edition and the gorgeous Steelbook!

If you know someone who is a big fan of ROBOCOP, or if you yourself are in love with this movie, then you best order it now! The Limited Edition currently costs $32 - $50 and can be procured from AMAZON, BULL MOOSE, DIABOLIK DVD, or directly from ARROW VIDEO!

The Steelbook (which has all of the extras, but none of the bells and whistles like the lobby cards, booklet, and poster) is also in the $32 - $50 range and can be purchased from AMAZON, BULL MOOSE, DIABOLIK DVD, or ARROW VIDEO!