Arrow Video Brings Wes Craven's THE HILLS HAVE EYES PART 2 and Aldo Lado's WHO SAW HER DIE? to Blu-ray on September 17th! A MOTOCROSS TEAM BATTLES CANNIBALS IN THE DESERT & JAMES BOND TRACKS A KILLER IN THE CANALS OF VENICE IN ARROW'S LATEST RELEASES!

I'm a big fan of Wes Craven's THE HILLS HAVE EYES, and yet, I've never seen it's sequel (even though I own the Kino Lorber Blu-ray release). I plan on changing that in the near future though - the dog flashback sequences alone seem worth the price of admission! And I'm still a neophyte when it comes to giallo films, which means I've never laid eyes on WHO SAW HER DIE? A Venetian murder mystery with George Lazenby sounds too good to pass up! If you're as curious as I am about these two new Blu-ray titles, then continue reading for a closer look!

Synopsis: The hills are once again alive with the sound of screaming in Wes Craven's hugely entertaining follow-up to his own groundbreaking 1977 film THE HILLS HAVE EYES. A motocross team on their way to trial a new super-fuel head out across the desert lead by Rachel, who, unbeknownst to the rest of the group, is a survivor of the cannibal clan which menaced the Carter family several years before.

Opting to take an ill-advised shortcut across the desert, the busload of youngsters drive straight into the path of the remnants of Rachel's demented cannibal kin - the menacing Pluto, and a hulking, blood-hungry brute by the name of "The Reaper." Made by Wes Craven immediately prior to his smash-hit A NIGHTMARE ON ELM STREET, THE HILLS HAVE EYES PART 2 diverges from the grim tone of its predecessor in favour of fun action-horror thrills and spills replete with mutants, motorbikes, and - oh yes - dog flashbacks!

Limited Edition Exlusives:
Arrow Video's Limited Edition of THE HILLS HAVE EYES PART 2 will be available on Tuesday, September 17th and should cost between $32 - $35! Add this title to your collection (or replace your current DVD or Blu-ray) and order a copy from AMAZON, BULL MOOSE, or DIABOLIK DVD today! 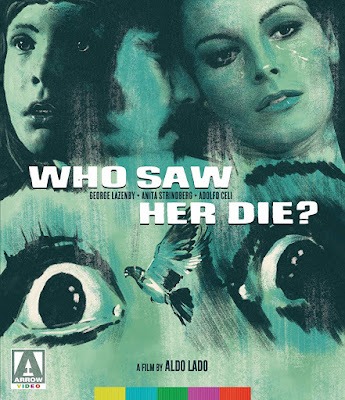 Sculptor Franco Serpieri (Lazenby) welcomes Roberta (Nicoletta Elmi - DEEP RED) - his young daughter from a failed marriage - to Venice, unaware that a disturbed child-killer is stalking the city's canals. When Roberta's body is found floating face-down in the river, the lives of Franco and his estranged wife Elizabeth (Anita Strindberg - THE CASE OF THE SCORPION'S TAIL) are ripped asunder. Desperate for vengeance, Franco turns detective in a bid to track down his daughter's killer, and in the process unearths shocking evidence of depravity and corruption which implicates some of the most respected figures in Venetian society.

Released at the height of the giallo boom, this gripping mystery thriller boasts some of the most iconic names associated with the genre on both sides of the camera. Co-starring Dominique Boschero (THE IGUANA WITH THE TONGUE OF FIRE) and Adolfo Celi (THUNDERBALL), and featuring one of the all-time greatest scores from maestro Ennio Morricone (WHAT HAVE YOU DONE TO SOLANGE?), WHO SAW HER DIE? thrills anew in its high definition debut!

Extras:
Arrow's release of WHO SAW HER DIE? comes to Blu-ray on Tuesday, September 17th and should cost between $24 - $28! If you're a giallo fan, add this one to your collection ASAP by ordering it from AMAZON, BULL MOOSE, or DIABOLIK DVD!