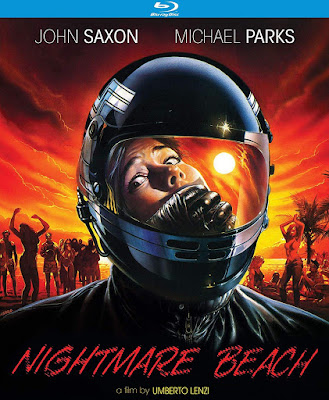 I watched NIGHTMARE BEACH A looong time ago, under its alternate title of WELCOME TO SPRING BREAK, but I don't remember much about it. (Doesn't the killer electrocute victims with his motorcycle or some such nonsense? I seem to recall that.)

WANTED DEAD OR ALIVE is a Rutger Hauer action flick that I've overlooked somehow. Watching "The Rut" take on KISS' Gene Simmons (who plays a terrorist in the film) sounds like it'll be a real hoot! Both films have been remastered (in 4K & 2K respectively), and come with audio commentaries and interviews! Continue onward for the full scoop on these discs Vault Dwellers!

Synopsis: From Umberto Lenzi, notorious director of such Euro-sleaze classics as PARANOIA, SEVEN BLOODSTAINED ORCHIDS, SPASMO, EYEBALL, and CANNIBAL FEROX  comes NIGHTMARE BEACH (aka WELCOME TO SPRING BREAK), a shockingly gory tale of a madman in a motorcycle helmet who is taking out young co-eds all over the sparkling sands of South Florida during Spring Break. 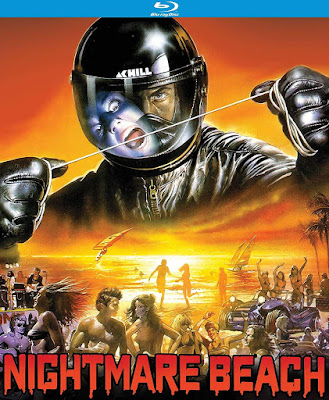 As the body count creeps up, Miami detective John Saxon (A NIGHTMARE ON ELM STREET, BLACK CHRISTMAS, EVIL EYE) tries to keep ahead of the curve in this carnage-packed slasher gem from the maestro of macabre. Featuring a rollicking score by Goblin's Claudio Simonetti (SUSPIRIA, DAWN OF THE DEAD, THE HEROIN BUSTERS) and co-starring the great Michael Parks (KILL BILL VOL. 1 & 2 and TV's THEN CAME BRONSON).

Extras:
Kino Lorber's Special Edition of NIGHTMARE BEACH is now available on Blu-ray disc, and should cost between $18 - $20! Add Umberto Lenzi's oddball slasher movie to your collection today and order a copy from AMAZON, BULL MOOSE, DIABOLIK DVD, or directly from KINO LORBER! 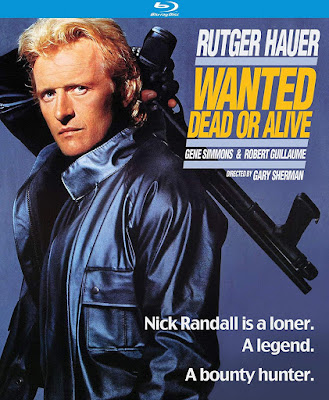 Synopsis: Nick Randall (Rutger Hauer) is an urban bounty hunter, a lethal professional who collects society's garbage for a living. Malak Al Rahim (Gene Simmons) is an international terrorist with a plan to turn Los Angeles into a bloody battlefield. But when the CIA uses Randall as bait to trap the madman, the hunter becomes the hunted. And when the violence hits Randall's home, the bounty becomes a mission of very personal vengeance.

Robert Guillaume, William Russ, and Mel Harris co-star in this action-packed thriller which features a final showdown that critics and fans alike called one of the most explosive climaxes of the decade!

Extras:
With Kino Lorber's release of this movie, you are one step closer to owning Rutger Hauer's complete filmography! (Here's hoping THE HITCHER and/or SPLIT SECOND aren't far behind!) WANTED DEAD OR ALIVE (SPECIAL EDITION) will cost you between $18 - $20, and is currently available from AMAZON, BULL MOOSE, DIABOLIK DVD, and KINO LORBER!