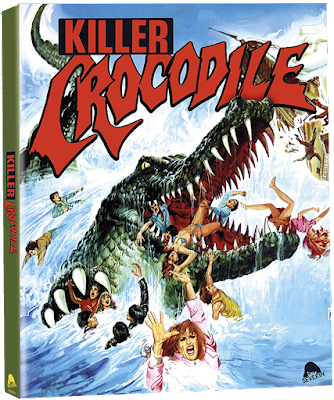 It's been ages since I first experienced KILLER CROCODILE on a bootleg DVD, so you can imagine how happy I am to finally be able to upgrade! On September 24th, Severin Films brings this classic Italian creature feature to Blu-ray with a new 2K transfer, and lots of new extras! Plus, if you're one of the lucky 4,000 that snaps up the limited edition release, you get KILLER CROCODILE 2 as well! I cannot convey how excited I am for this title Vault Dwellers! To find out if you should share in my excitement (you totally should!) continue onward for a closer look!

Extras:
The standard edition of KILLER CROCODILE comes out on September 24th, and should cost around $24. (Or between $13 - $20 if you want to get it on DVD.) You can order it now from AMAZON, BULL MOOSE, or directly from SEVERIN FILMS. But if you're like me, you'll probably want to go with the Limited Edition to get your paws on KILLER CROCODILE 2! 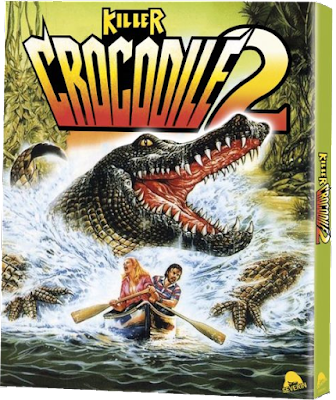 Synopsis: Special makeup effects artist Gianetto De Rossi helmed this followup to Fabrizio de Angelis' KILLER CROCODILE! When a New York journalist named Liza Post pokes around the future site of a Caribbean holiday resort, it is soon discovered that carelessly disposed toxic waste has created a monstrous crocodile that devours  anyone unfortunate to be on the water. (Oh no! Not again!) Crocodile hunter Kevin Jones (Richard Anthony Crenna), responsible for killing the original monster, is called in for help when Liza goes missing.

Extras:
As stated earlier, this sequel is exclusive to the 4,000 copies of Severin's limited edition of KILLER CROCODILE - It should cost between $24 - $34 (that's like $12 - $17 for each movie)! So do yourself a favor and order one now from AMAZON, BULL MOOSE, DIABOLIK DVD, or directly from SEVERIN FILMS to make sure you don't miss out on this (crocodile) rockin' double feature!