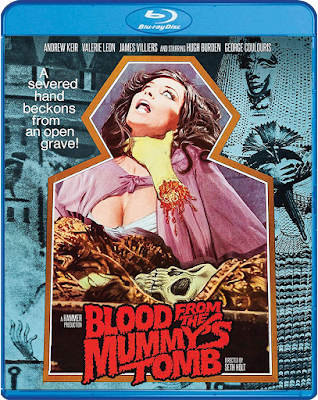 2019 has been a damned good year for Scream Factory, who has continued to build one of the largest physical media catalogs I've ever seen. (It reminds me of MGM back in their Midnite Movies days!) And now they've added three more classic films to their vaults, with the release of Hammer's BLOOD FROM THE MUMMY'S TOMB and SCARS OF DRACULA, and the final entry in the "Sadian Trilogy," namely CIRCUS OF HORRORS! Both Hammer titles fare the best and come complete with new audio commentaries and two different aspect ratios! Let's take a closer look before pre-ordering these Vault Dwellers, shall we?

Synopsis: A British expedition in Egypt discovers the ancient sealed tomb of the evil Queen Tera. But when one of the archaeologists steals a mysterious ring from the corpse's severed hand, he unleashes a relentless curse upon his beautiful daughter. Is the voluptuous young woman now a reincarnation of the diabolical sorceress... or has the curse of the mummy returned to reveal its horrific revenge?

Andrew Keir (QUATERMASS AND THE PIT) and the beautiful Valerie Leon (THE SPY WHO LOVED ME) star in this supernatural shocker based on Bram Stoker's classic novel The Jewel Of The Seven Stars.

Extras:
The fourth and final film of Hammer's Mummy series certainly received a lot of love from Scream Factory! BLOOD FROM THE MUMMY'S TOMB will be released on Tuesday, September 10th, and should cost in the neighborhood of $22! Add this movie to your Hammer Blu-ray collection and order it today from AMAZON, BULL MOOSE, DIABOLIK DVD, or directly from SHOUT! FACTORY. 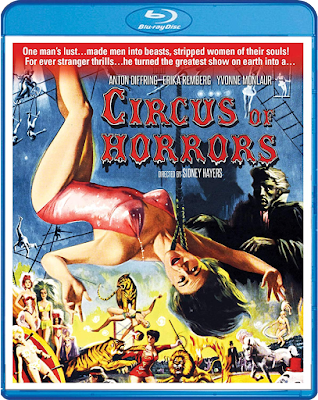 Synopsis: A deranged plastic surgeon (Anton Diffring) takes over a traveling circus, then transforms horribly disfigured young women into ravishing beauties and coerces them to perform in his three-ring extravaganza. But when the re-sculpted lovelies try to escape the clutches of the obsessed doctor, they begin to meet with sudden and horrific "accidents." Now the trapeze is swinging, the knives are flying, the wild animals are loose – and "The Grisliest Show on Earth" is about to begin!

Donald Pleasence (the HALLOWEEN series) and Yvonne Monlaur (THE BRIDES OF DRACULA) co-star in this notorious 1960 British cult classic from writer George Baxt (THE CITY OF THE DEAD) and director Sidney Hayers (BURN, WITCH, BURN!).

Extras:
While it didn't get nearly as much love as the two upcoming Hammer films, CIRCUS OF HORRORS is still a welcome addition to any collection! This release should cost you roughly $22 and will be available on September 10th from AMAZON, BULL MOOSE, DIABOLIK DVD, and SHOUT! FACTORY. 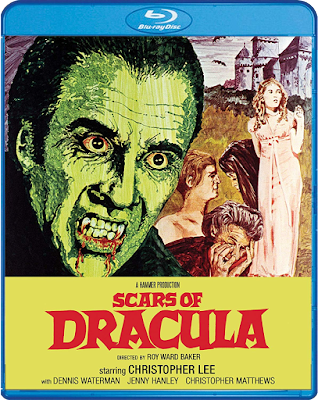 Synopsis: The legendary Christopher Lee is back as Dracula, bringing unspeakable horrors upon a local village that defies his evil reign. But when a young man and his luscious girlfriend unwittingly visit the Count's castle, they find themselves trapped in a face-to-face frenzy of bloodthirsty vixens, religious blasphemy and sadistic henchmen. The Prince of Darkness has returned like never before, but will his horrific mark remain forever?

SCARS OF DRACULA comes out the same day (September 10th) and will be the same price ($22) as the previously mentioned titles! Keep adding to your Hammer Horror collection and order yourself a copy of this disc today from AMAZON, BULL MOOSE, DIABOLIK DVD, or directly from SHOUT! FACTORY.