Scream Factory Caps off July 2019 with Humanoids and Hammer Horror! 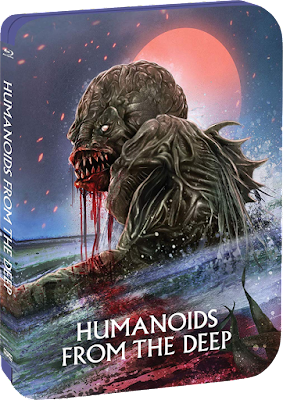 Jesus wept! How am I going to afford all of this?! Scream Factory just released FIVE new Blu-ray titles today, and being fresh off of vacation, I have no expendable income to purchase and enjoy these new discs!

First up is Roger Corman's HUMANOIDS FROM THE DEEP, which received a new 4K scan and comes in a gorgeous Steelbook! And as if that wasn't enough to sate us collectors, Scream Factory dropped four Hammer Horror titles today as well, including LUST FOR A VAMPIRE, QUATERMASS AND THE PIT, QUATERMASS II, and THE REPTILE! I know you're just as excited as I am Vault Dwellers, so read onward to get the full specs & extras for these new titles!

Synopsis: They're Not Human. Something evil is happening in the sleepy fishing village of Noyo. Fish-like humanoid creatures, spawned by mutant DNA, begin rising from the ocean looking to spawn with the local women. Scientist Susan Drake (Ann Turkel - THE CASSANDRA CROSSING), along with local fisherman Jim Hill (Doug McClure - THE LAND THAT TIME FORGOT), looks for the cause of this invasion of creatures from the ocean floor.

Extras:
Scream Factory's Limited Edition Steelbook of HUMANOIDS FROM THE DEEP is now available and should cost between $23 - $25. Treat yourself to this tale of mutant fish creatures who yearn to mate with human women and order a copy now from AMAZON, BULL MOOSE, DIABOLIK DVD, or directly from SHOUT! FACTORY. 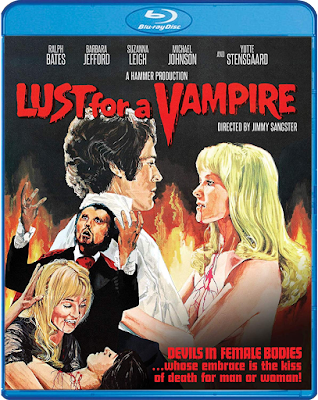 Synopsis: A mysterious man performs the rites of black magic ... bringing the notorious female vampire Carmilla Karnstein back to life. Looking to quench her bloodlust for the fairer sex, she enrolls at an exclusive girl's school as the young debutante Mircalla (Yutte Stensgaard), and begins to feast on her fellow students as well as indulging in her unholy desires for a teacher...

With the death toll mounting at both the school and the nearby village, can anyone stop Carmilla's evil ways?

Extras:
It's always good to see more Hammer Horror on Blu-ray! LUST FOR A VAMPIRE is now available and should cost approximately $23! Get your copy now from AMAZON, BULL MOOSE, DIABOLIK DVD, or from SHOUT! FACTORY! 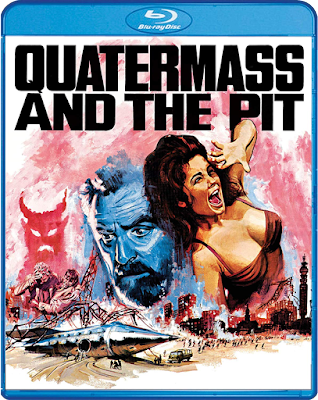 Synopsis: Hobbs End, Knightsbridge, London. While working on a new subway tunnel for the London Underground, a group of construction workers uncover a strangely shaped skull. Nearby, another discovery: a large, mysterious and impenetrable metal object.

Initially mistaken for an unexploded bomb, the object and its strange power turn out to be far more horrific than anybody could have possibly imagined. Is it of this earth? Could it be the ancestral link to mankind's evolution? Or could it be an ancient link to the unleashing of the ultimate evil?

There's only one man capable of unraveling the clues, and his name is Professor Bernard Quatermass (Andrew Keir), a man of science who thrives on the dark mysteries of the world ...

Written by legendary screenwriter Nigel Kneale, QUATERMASS AND THE PIT is a seminal British sci-fi classic. For its U.S. release by 20th Century Fox, the film was retitled FIVE MILLION YEARS TO EARTH.

Extras:
QUATERMASS AND THE PIT is now available wherever discs are sold and should cost between $23 - $24! Order this Blu-ray ASAP from AMAZON, BULL MOOSE, DIABOLIK DVD, or directly from SHOUT! FACTORY. 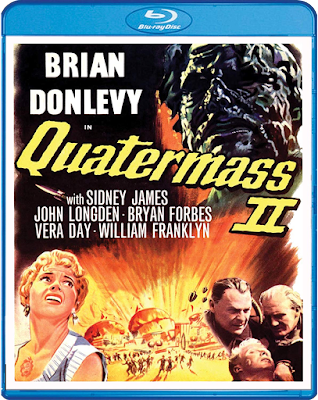 Synopsis: Professor Quatermass returns in this sequel to THE QUATERMASS XPERIMENT!

Quatermass II is the second and most talked about of the three science fiction stories written by Nigel Kneale and based on his critically acclaimed 1955 BBC series.

Professor Quatermass, played by Hollywood veteran Brian Donlevy (reprising his role from THE QUATERMASS XPERIMENT) is Britain's most clever scientist. Investigating a series of bizarre incidents that have been reported from a deserted area, he finds a group of soldiers and government officials that appear to be controlled by aliens from another world.

When a close friend is brutally murdered by these beings, Quatermass leads a mob of local workers to a showdown with the extraterrestrials. The film was retitled ENEMY FROM SPACE for its U.S. theatrical release.

Extras:
QUATERMASS II is currently available and should cost between $23 - $24! Grab your copy now from AMAZON, BULL MOOSE, DIABOLIK DVD, or SHOUT! FACTORY. 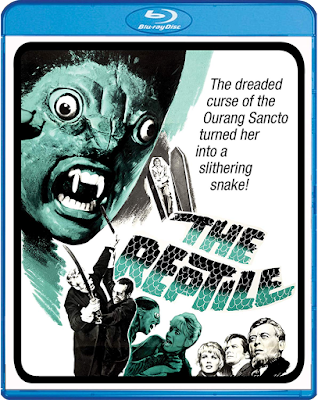 Synopsis: A deadly epidemic is spreading through the remote Cornish village of Clagmoor Heath. As darkness falls, its victims are found foaming at the mouth with savage wounds on their necks. After his brother falls prey to the "black death," Harry Spalding (Ray Barrett - TERROR FROM UNDER THE HOUSE) travels with his new wife (Jennifer Daniel - THE KISS OF THE VAMPIRE) to Clagmoor to investigate his sibling's mysterious death.

With little help from the unfriendly locals, Harry follows a trail of clues that leads him to the sinister Dr. Franklyn (Noel Willman - THE VENGEANCE OF SHE), the doctor's strange, but beautiful daughter (Jacqueline Pearce - Doctor Who) ... and a horrific family secret.

Extras:
Hammer's THE REPTILE is the final release from Scream Factory this week and should cost $23! Add this unique fright flick to your collection now by ordering it from AMAZON, BULL MOOSE, DIABOLIK DVD, or SHOUT! FACTORY.