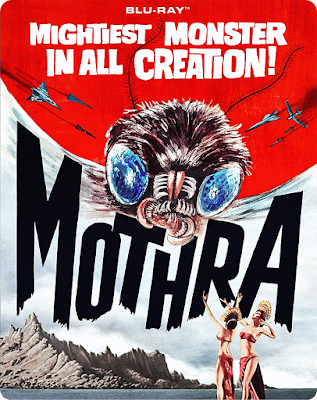 TOHO'S "MOTHRA" COMES TO BLU-RAY FOR THE FIRST TIME IN NORTH AMERICA IN COLLECTIBLE STEELBOOK PACKAGING!

I've patiently been waiting with bated breath for Criterion Collection to announce the Showa Godzilla films on Blu-ray, when out of nowhere, Mill Creek Entertainment unleashes an all new Blu of Mothra's feature film debut! Housed in a metal case and featuring some cool extras, this is definitely a must-own title for all you kaiju fans out there!

Synopsis: Following reports of human life on Infant Island, the supposedly deserted site of atomic bomb tests, an international expedition to the heavily-radiated island discovers a native tribe and tiny twin female fairies called "Shobijin" who guard a sacred egg. The overzealous expedition leader kidnaps the Shobijin to exhibit in a Tokyo stage show but soon they summon their protector, hatching the egg and releasing a giant caterpillar. When Mothra arrives in Japan and finally transforms into the ultimate beast, impervious to modern weapons, the nation and its people face their destruction.

Extras:
Mill Creek's MOTHRA Steelbook is now available to own and should cost between $14 - $17! Fill in that empty spot in your personal kaiju film collection by picking up a copy today from AMAZON, BULL MOOSE, DIABOLIK DVD, or MILL CREEK ENTERTAINMENT!