It's Time to DO OR DIE, So Grab Your GUNS: Two More Andy Sidaris Classics Make Their Way to Blu-ray on September 17th! 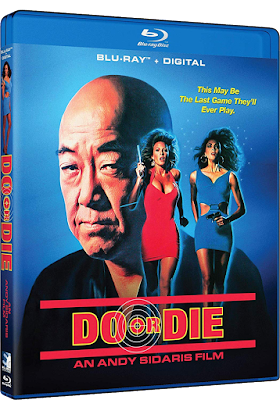 I've been sitting on a Mill Creek DVD set of Andy Sidaris flicks for some time now, and I still haven't watched anything other than HARD TICKET TO HAWAII. But it looks like I'll probably end up ditching that set to start collecting Mill Creek's Sidaris Blus, since they are reasonably priced, and come with new 4K restorations (courtesy of AGFA) and extras!

I'm pretty excited for these two new titles too, because where else can you see Pat Morita and Eric Estrada play bad guys that get taken down by beautiful gun-toting women?! If that sounds like your jam, then continue reading more about these new Andy Sidaris Blu-rays!

Synopsis: A pair of female agents is targeted for elimination by an Asian criminal kingpin out for revenge. The evil mastermind sends out an army of assassins with the same mission, to kill agents Donna and Nicole!

“DO OR DIE lampoons the size-conscious, clichéd action hero and presents women that are stronger, smarter, and more effective than their male counterparts both in the film and in action cinema as a whole.” – David Carter –Not Coming To A Theater Near You

Extras:
DO OR DIE arrives on Blu-ray on September 17th and will cost between $10 - $20! Order yourself a copy now from AMAZON, BULL MOOSE, DIABOLIK DVD, or directly from MILL CREEK! 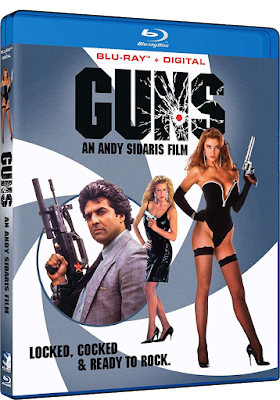 Synopsis: South American criminal Juan Degas has been using the Hawaiian Islands as his base for smuggling weapons from China to Latin America. Tracking their target from Hawaii to Las Vegas, our agents must watch their backs while attempting to take down their prey.

“Guns was an action films where women got to shoot the guns, beat up the bad guys, and ultimately save the world from a smirking misogynist.” – Lisa Marie Bowman, Through the Shattered Lens
Disc Specs:
Rated R | Color | 96 minutes | Region A
Video - 1080p Widescreen (1.78:1)
Audio - DTS-HD Master Audio

Extras:
GUNS will be available wherever Blu-ray discs are sold on September 17th and should cost between $10 - $20! Get your copy now from AMAZON, BULL MOOSE, DIABOLIK DVD, or directly from MILL CREEK!