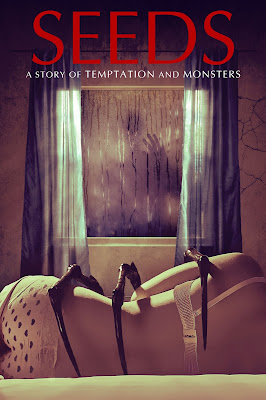 This new movie looks like it's going to be quite icky Vault Dwellers! The film apparently contains some sort of tentacled/spider-legged menace, offers up a dash of body horror, and tops all that off with some good old-fashioned incest! All that aside, SEEDS doesn't look too shabby, and has been receiving positive reviews despite its discomforting subject matter. It had a limited theatrical release last weekend, and makes its DVD (and VOD) debut on September 24th!

Synopsis: After a night of debauchery spirals out of control, Marcus retreats to his family home along the New England coast. His solitude is disturbed when his brother asks Marcus to look after his estranged nephew and niece. As days pass, solace escapes him; he feels baited by a dark force. Is he losing his mind or has something terrible burrowed deep within him? Incubating. Waiting until the climate is right. Haunted by his deepest fears, Marcus struggles not to succumb as he fights to protect Lily, his beloved niece from a monster that lies in wait.

Director Owen Long’s SEEDS is a gothic horror about a man haunted by his dark past while pursuing some self-care on the New England coast. The film was written by Steven Weisman, and also stars Trevor Long (star of Netflix drama Ozark), Andrea Chen, Garr Long, and Kevin Breznahan.

SEEDS arrives on DVD and VOD on September 24th, but I cannot seem to find it listed at any major online retailers. I'll keep my eyes peeled, and update this post once that changes!