John Carpenter's VAMPIRES Will FEAR NO EVIL on September 24th! 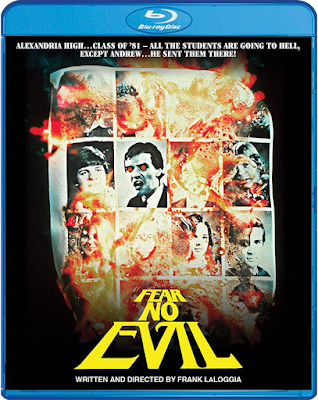 Growing up, I was always a fan of Frank LaLoggia's LADY IN WHITE (which used to air on USA Network all of the time), which eventually led me to discover FEAR NO EVIL. LaLoggia's tale of a teenage Antichrist is a far different beast than his classic ghost story, and features a bloody baptism, death by dodgeball, and a showdown between the reincarnation of Satan and two archangels! It's not for all tastes, but I assure you that the movie really grows on you after multiple viewings.

John Carpenter's VAMPIRES was made in the twilight of his career as a director, and is one of his better efforts. (It followed ESCAPE FROM L.A. and preceded GHOSTS OF MARS and THE WARD.) James Woods (before Twitter drove him mad) leads a team of hunters against a powerful vampire who wants to make himself immune to sunlight! Both films get lots of new extras, but FEAR NO EVIL also gets a 4K transfer! I'm super excited for these new titles - I can't wait to add these to my collection!

Synopsis: God has appointed three archangels to fight against Lucifer, who has assumed human features. Archangel Raphael, in the guise of Father Damon, kills Lucifer and ends his life in jail. But his sister, Archangel Mikhail, knows that one day the Devil will reappear. Eighteen years later, Lucifer returns, now in the form of Andrew, a brilliant but shy schoolboy who becomes conscious of his devilish nature on his birthday. Archangel Mikhail, allies with Gabrielle to defeat Lucifer in this "remarkably assured, personal and powerful film [that] is never less than gripping" (TV Guide)!

Extras:
FEAR NO EVIL makes its big Blu-ray debut on September 24th, and should cost approximately $23! Order a copy of this long out of print Horror film now from AMAZON, BULL MOOSE, DIABOLIK DVD, or directly from SHOUT! FACTORY. 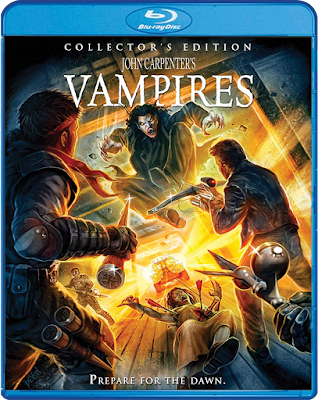 Breaking all the rules, Crow and Montoya take one of Valek's victims hostage – a beautiful but unlucky prostitute (Sheryl Lee). She is the sole psychic link to Valek and they use her to track down the leader of the undead. As Valek nears the climax of his 600-year search for the Berziers Cross, Jack and the new Team Crow do everything possible to prevent him from possessing the only thing that can grant him and all the vampires the omnipotent power to walk the world in daylight.

Extras:
With the addition of VAMPIRES, Scream Factory has nearly all of Carpenter's films in their grasp and I'm pretty OK with that. (If you're keeping track, they are only missing DARK STAR, ESCAPE FROM L.A., GHOSTS OF MARS, THE WARD, and Carpenter's two contributions to the Masters of Horror TV series: CIGARETTE BURNS and PRO-LIFE!) This Collector's Edition Blu-ray is due out on September 24th, and should cost between $24 - $29! Order yourself a copy now from AMAZON, BULL MOOSE, DIABOLIK DVD, or directly from SHOUT! FACTORY and get one step closer to owning the entirety of John Carpenter's filmography!