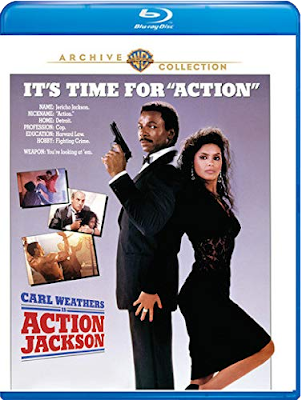 YOU CAN STOP SCOURING EBAY BECAUSE CRAIG R. BAXLEY'S 1988 ACTION-COMEDY IS FINALLY BACK IN PRINT!

Originally released back on Blu-ray in 2013, ACTION JACKSON has been out of print for several years. (And going for ludicrous prices online!) Thankfully Warner Archive saw fit to bring it back, and I couldn't be happier! ACTION JACKSON was a movie I discovered back in my teenage years and I still love it! Carl Weathers is awesome as the tough-as-nails cop Jericho "Action" Jackson, plus the film features Craig T. Nelson as the crazed villain, and offers up both Vanity and Sharon Stone as eye candy! It's a fun action flick that harkens back to the Blaxploitation films of the 70s, and I for one cannot wait to revisit ACTION JACKSON in glorious HD!

Synopsis: Like a blast from a .44 magnum, Carl Weathers (PREDATOR, The ROCKY series) makes ACTION JACKSON a hero who delivers the goods with charisma and excitement. He plays Detroit police Sergeant Jericho Jackson, pitted against the brutal thugs of ruthless auto tycoon Peter Dellaplane (Craig T. Nelson - POLTERGEIST, THE INCREDIBLES), who’s out to murder his way to political power. Jackson’s also involved with Dellaplane’s beautiful wife, Patrice (Sharon Stone - TOTAL RECALL, FATAL ATTRACTION) – and his mistress, Sydney (Vanity - THE LAST DRAGON, NEVER TOO YOUNG TO DIE). Framed and hunted by his fellow officers, Jackson sets up a desperate showdown that hurls ACTION JACKSON toward a heart-stopping climax.

Extras:
While I'm pleased to see ACTION JACKSON back in print, and at a reasonable price (this re-release currently goes for between $14 - $19), I feel like a little extra effort could have went into this disc. I mean they couldn't even include a trailer? Regardless if you're a fan of this movie, rejoice and order a copy now from AMAZON, BULL MOOSE, or DIABOLIK DVD!