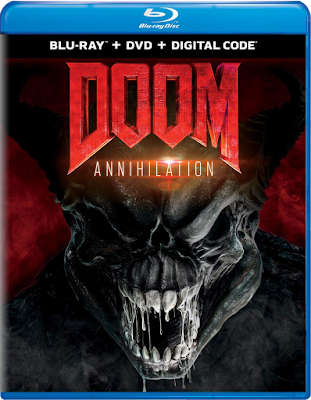 FOURTEEN YEARS AFTER "DOOM" FLOPPED IN THEATERS, UNIVERSAL CREATES A NEW ADAPTION AND SENDS IT STRAIGHT TO HOME VIDEO HELL!

The closest thing we've ever gotten to an actual DOOM movie was John Carpenter's GHOSTS OF MARS. Oof. Think about that for a second - one of Carpenter's weakest filmmaking efforts hit closer to the mark than a big-budget studio film. And while DOOM: ANNIHILATION may be a bit truer to its source material, the fact that Universal is quietly dumping it onto DVD & Blu-ray next Tuesday doesn't bode well for this movie. But hey, you never know Vault Dwellers, this DOOM reboot might be a lot better than any of us are anticipating. Or.... maybe not.

Synopsis: Based on the popular original video game, DOOM: ANNIHILATION is an explosive, terrifying thrill ride. On the darkest moon of Mars, scientists have found an ancient portal which allows teleportation throughout the universe. Considered to be mankind's greatest discovery, it's actually a gateway from hell, unleashing a swarm of demons looking to steal the souls of everyone who gets in their way. It's up to Lieutenant Joan Dark and an elite unit of Marines to destroy an ever-growing horde of bloodsucking and soul-stealing beasts and prevent them from taking over planet earth.

The film is executive produced by Lorenzo Di Bonaventura (BUMBLEBEE) and John Wells (Animal Kingdom) and is produced by Jeffery Beach (JARHEAD 3: THE SIEGE), Phillip Roth (DEATH RACE 4: BEYOND ANARCHY) and Ogden Gavanski (CULT OF CHUCKY).

Extras:
Universal's DOOM: ANNIHILATION comes to both DVD & Blu-ray on Tuesday, October 1st and will cost about $15. I personally don't have much faith that this film will be good, let alone as good as the previous 2005 dud. Still hope springs eternal, and if you're gung-ho about adding this title to your collection, then go ahead an order a copy today from AMAZON or BULL MOOSE.