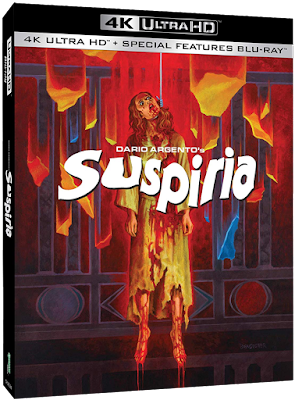 With so many labels restoring Horror and exploitation titles in 4K, it was only a matter of time before one of them started releasing 4K UHD discs! But my money was never on Synapse, who's releasing Dario Argento's SUSPIRIA to the format this November! Along with the most pristine video presentation of the film that we've seen up to this point, this new release will also have multiple audio options and a good number of special features! To see if this upgrade is worth it, continue reading to learn more about what Synapse's 4K disc has to offer!

Synopsis: Suzy (Jessica Harper) travels to Germany to attend ballet school. When she arrives, late on a stormy night, no one lets her in, and she sees Pat (Eva Axén), another student, fleeing from the school. When Pat reaches her apartment, she is murdered. The next day, Suzy is admitted to her new school, but has a difficult time settling in. She hears noises, and often feels ill. As more people die, Suzy uncovers the terrifying secret history of the place. 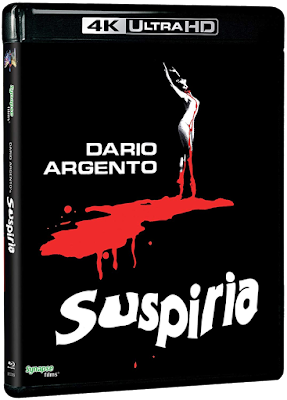 Extras:
If you are a big fan of SUSPIRIA, you simply must have this release! Yeah I know, Synapse already put out a nifty Blu-ray last March featuring the same 4K restoration, and you probably own it. BUT the picture (and audio) quality on this 4K disc will be so much better because the film won't be compressed to fit onto a Blu-ray disc, guaranteeing you the absolute best presentation of SUSPIRIA that you will ever lay eyes on!

Synapse's SUSPIRIA 4K UHD will be available on November 19th, and should cost between $32 - $45! Order yourself a copy today from AMAZON, BULL MOOSE, DIABOLIK DVD, or directly from SYNAPSE FILMS!