Long Live The King! - GODZILLA: KING OF THE MONSTERS Now Available on All Physical Media Formats! 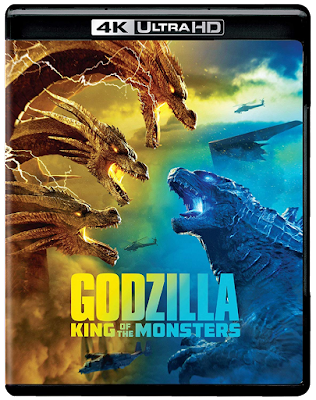 GODZILLA: KING OF THE MONSTERS was easily my favorite film of 2019, and kicked off a fantastic year of Godzilla-themed festivities and surprises, ranging from a trip to G-FEST in Chicago, to an all-weekend 35mm Godzilla film fest at The Mahoning Drive-In in Lehighton, PA, to The Criterion Collection's insane announcement of their GODZILLA: THE SHOWA ERA Blu-ray boxed set! Needless to say, 2019 was truly the year of Godzilla!

Though far from perfect, GODZILLA: KING OF THE MONSTERS was an incredible experience for yours truly - my inner child shrieked with joy to see some of my favorite movie monsters of all time on the big screen in a mega-budget Hollywood film! And now I can revisit it anytime I want to in glorious high-definition, while simultaneously bringing my Godzilla movie collection ever closer to completion!

Synopsis: The story follows the heroic efforts of the crypto-zoological agency Monarch as its members face off against a battery of god-sized monsters, including the mighty Godzilla, who collides with Mothra, Rodan, and his ultimate nemesis, the three-headed King Ghidorah. When these ancient super-species - thought to be mere myths - rise again, they all vie for supremacy, leaving humanity’s very existence hanging in the balance.

Extras:
With over two hours of extras, an audio commentary, and the best audio & video presentation you can possibly get, the new 4K (and plain ole Blu-ray) of GODZILLA: KING OF THE MONSTERS is a must-own in my book! The 4K UHD goes for $30, while the Blu-ray costs around $25 - both are readily available wherever movies are sold including AMAZON and BULL MOOSE! Grab a copy today and immerse yourselves in the growing Monsterverse!