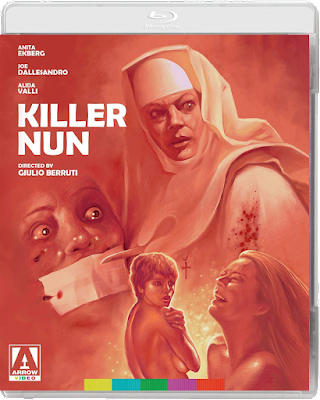 I really need to broaden my horizons Vault Dwellers, because I am completely out of the loop when it comes to "Nunsploitation" films! I can name a handful of titles that hail from this sub-genre of exploitation cinema off the top of my head (e.g. THE SINFUL NUNS OF SAINT VALENTINE and THE OTHER HELL), but I've never seen a single one! And honestly I wouldn't really know where to begin! Perhaps Arrow Video's new Blu-ray of KILLER NUN is a good place to start? (Let me know in the comments!)

One of the most notorious 'nunsploitation' films, KILLER NUN tells the sordid story of Sister Gertrude, a disturbed woman of the cloth who degenerates into a perverse mire of drug taking, sexual perversion, sadistic torture and murder. Joe Dallesandro (THE CLIMBER, FLESH FOR FRANKENSTEIN), Alida Valli (THE POSSESSED, SUSPIRIA), and the ample Paola Morra (BEHIND CONVENT WALLS) offer spirited performances and able support to Ekberg, in this shocking tale based on real events.

Boasting an incongruously classy score by legendary composer Alessandro Alessandroni (WOMEN'S CAMP 119) and stylishly rendered scenes of sex and murder, KILLER NUN takes the viewer on hair-raising journey from the heights of religious ecstasy to the depths of devilish degeneracy.

Extras:
Arrow Video's stellar Blu-ray of KILLER NUN will be available on Tuesday, October 15th and should cost you between $24 - $28! Whether you're a new to the world of nunsploitation, or a veteran of sleazy cinema, this looks to be a fantastic release for this infamous classic! You can order yourself a copy of KILLER NUN today from AMAZON, BULL MOOSE, or DIABOLIK DVD!