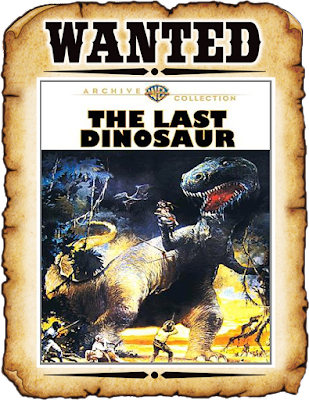 With JURASSIC WORLD: FALLEN KINGDOM about to hit theaters, I've been feeling nostalgic for the dinosaur films of my youth. During my early childhood, I became enamored with dinosaurs, which made me the "weird kid" throughout grade (and middle) school! I read books about prehistoric creatures, drew pictures of them, and naturally watched cartoons AND movies featuring those "terrible lizards." I just couldn't get enough!

From KING KONG and DINOSAURUS! to BABY: SECRET OF THE LOST LEGEND and THE CRATER LAKE MONSTER, I watched anything and everything that contained any sort of prehistoric fauna. And out of those dozens of films, there's one in particular that left a lasting impression to this day: THE LAST DINOSAUR!

Synopsis: During a routine mission aboard "The Polar Borer," an exploratory laser-drill used in seeking oil reserves under the polar ice caps, the crew members made a history-shattering discovery: There is a prehistoric world beneath the Earth's crust, teeming with life! A geologist named Chuck Wade (Steven Keats) is the sole survivor of the expedition, and tells the world during a press conference that a T-Rex ate the rest of his crew!

Realizing that a Tyrannosaurus head would be one hell of a trophy to hang on his wall, Thrust puts together a new expedition made up of Chuck, a Massai tracker named Bunta (Luther Rackley), Dr. Kawamoto (Tetsu Nakamura), and a Pullitzer Prize-winning photographer named Frankie Banks (Joan Van Ark) who secures herself a spot on the trip by getting "Thrusted." With his team assembled, Maston leads them underground to bag himself a T-Rex!


Naturally things do not go well for the would-be hunters as they soon find themselves way in over their heads. Their intended quarry turns out to be nigh indestructible, and after losing a few colleagues, Thrust takes things personally! Chuck and Frankie try to talk some sense into the vengeance-fueled hunter,  but he'll not hear of any plans to escape because he is on a mad mission to kill the Tyrannosaurus by any means necessary!

THE LAST DINOSAUR is the result of an odd pairing of Tsuburaya Productions, known for their tokusatsu shows (primarily Ultraman) and Rankin/Bass, best known for all of those claymation Christmas specials you watch every holiday season! Together they crafted a rather gloomy adventure tale with laughable suitmation dinosaurs and a somewhat catchy theme song. While it isn't a great movie by any stretch, I have fond memories of watching this cult oddity in my youth and would love to see it given a little TLC for a change!

Availability: After failing to find a distributor, THE LAST DINOSAUR premiered on ABC on February 11, 1977 in a truncated 95-minute cut. After that, it would be released on VHS by various distributors in the 1990s, before finally being released on (Region Free!) DVD by The Warner Archive Collection back on May 9, 2011. It has the same uncut version of the film that Toho released on DVD two years earlier, but lacks any special features.

Current Rights Holder: Obviously Warner Bros. owns the U.S. rights at the moment (hence the DVD release I just mentioned). However, Shout! Factory has been dipping into the Warner vaults as of late (as evidenced by several of their recent and upcoming Scream! Factory titles) so I wouldn't be shocked if they did a nice little release of this one down the road. Only time will tell I suppose.


Blu-ray Wishlist:
I'm not sure if THE LAST DINOSAUR has built up enough of a cult following for any label to bother giving it a Blu-ray release, but we can only hope! If you also want this odd-ball dinosaur epic in HD, then let the powers that be at The Warner Archive Collection know by bugging them on social media. Hit them up on Facebook and/or Twitter, and maybe bother Shout! Factory on Facebook as well, just to let them know some of us are interested in a Blu-ray release for this title!