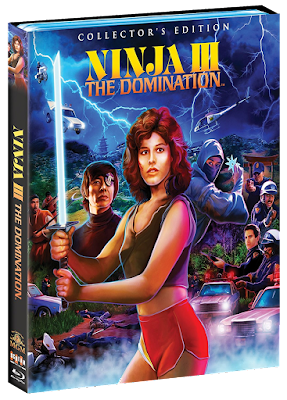 CULT FAVORITE "NINJA III: THE DOMINATION" GETS A NEW LEASE ON LIFE WITH A 4K TRANSFER AND NEW EXTRAS IN SCREAM FACTORY'S LATEST DOUBLE-DIP!

One of the most challenging aspects of being a film collector is deciding whether or not to upgrade when a new edition comes out. I often manage to fight the urge to purchase yet another copy of a film I already own and have watched multiple times, but this is one of those releases that give me pause and causes an internal struggle between my adult self and my inner man-child. Boasting new artwork, new extras, and (amazingly) an all new 4K transfer... I am definitely close to re-adding this title to my collection!

Synopsis: ONLY A NINJA CAN KILL A NINJA! Aerobic instructor Christie Ryder (Lucinda Dickey - BREAKIN', BREAKIN' 2: ELECTRIC BOOGALOO) becomes possessed by the spirit of an evil ninja when she comes to his aid after he was shot down. Dominated by the killer's vicious and relentless rage, she sets out to brutally attack his enemies.

Her boyfriend, confused by Christie's changing personality and afraid that he might be her next victim, enlists the help of Yamada (Shô Kosugi - ENTER THE NINJA, REVENGE OF THE NINJA). In a life-threatening exorcism and ultimate fight to the death, Yamada proves that he is Christie's only chance for survival.

Extras:
Scream Factory's shiny new Collector's Edition of NINJA III: THE DOMINATION is now available wherever Blu-rays are sold and costs between $18 - $25! Add it to your collection (for the first or second time) now by picking up a copy from AMAZON, BULLMOOSE, DIABOLIK DVD, or directly from SHOUT! FACTORY (which comes with an 18 x 24 poster)!