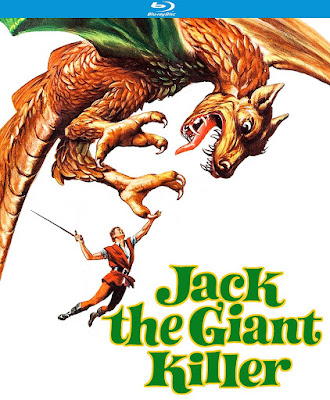 Long before it had the honor of appearing on Rifftrax Live, I had been a long-time fan of JACK THE GIANT KILLER! I first watched this film on TV at a young age and was blown away by the stop-motion effects (this is just BEFORE I discovered the films of Ray Harryhausen) and the number of creatures the film's hero has to face. Needless to say, it became an instant favorite of yours truly! And now it seems that the time is right to revisit this blast from my past now that it has made the leap to Blu-ray!

Synopsis: Forget about beanstalks. This "vivid fairy tale" (LA Herald-Examiner) brilliantly re-imagines the beloved fable as a rugged adventure that delights with "vigorous acting and excellent trick effects" (Halliwell's Film and Video Guide)! Reuniting the director and stars Kerwin Mathews and Torin Thatcher (from THE 7TH VOYAGE OF SINBAD), this visual treat is a journey you'll want to take again and again!

Farm boy Jack heroically rescues Princess Elaine from sorcerer Pendragon by slaying his bloodthirsty giant. But when Pendragon uses his evil powers to bewitch and imprison Elaine in his enchanted fortress, Jack must cross the ocean to brave dragons, two headed ogres, and an army of ghouls to save his lady love!

Extras:
If you're a fan of classic stop-motion fantasy films, you definitely need to add this one to your collection! JACK THE GIANT KILLER is currently available on Blu-ray disc and can be obtained from AMAZON, BULLMOOSE, and DIABOLIK DVD!