Scream Factory Brings THE CURSE OF THE CAT PEOPLE to Blu-ray at the End of June! 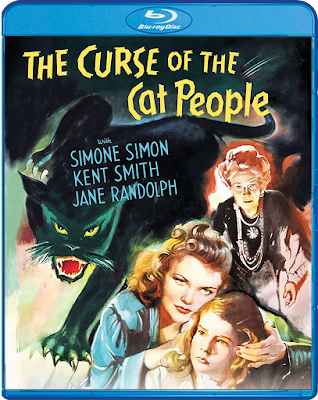 While I haven't seen THE CAT PEOPLE (or its remake), it has been on my radar for some time. And though my taste in film gravitates towards cinema from the 70s and 80s, I do enjoy going further back and watching the occasional black & white classic from time to time. (Which is why I'm SUPER excited for Universal's upcoming Blu-ray set that features all thirty of their classic monster movies!) That being said, I best get to watching the original CAT PEOPLE so I can dive into this sequel, which is making its Blu-ray debut in less than two weeks!

Synopsis: Filled with "wonderful atmosphere [and] fine, moody fantasy" (Leonard Maltin), this continuation of 1942's CAT PEOPLE follows Oliver Reed (Kent Smith), now remarried, living in idyllic Tarrytown, New York, and the father of six-year-old Amy. When Amy becomes withdrawn and speaks of consorting with a new "friend," Oliver worries that she may be under the influence of the spirit of his first wife. Is it just Amy's imagination that has manifested the enigmatic Irena (Simone Simon), who long believed herself to be descended from a race of Cat People?

Directors Gunther V. Fritsch and Robert Wise (making his directorial debut), co-helmed a gothic-laced mix of fantasy and fright so astute it was used in college psychology classes. And producer Val Lewton, given small budgets and lurid, pre-tested film titles by RKO, worked with rising filmmakers to emphasize the fear of the unseen, and turn meager resources into momentous works of psychological terror.

Extras:
THE CURSE OF THE CAT PEOPLE has seen a slight delay, but now has a firm street date of June 26th! You can order a copy now from AMAZON, BULLMOOSE, DIABOLIK DVD, or directly from SHOUT! FACTORY (if you want it sooner)!