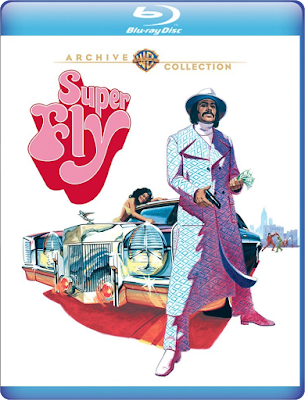 Seeing as how the SUPERFLY remake barely made its budget back, and was disliked my most moviegoers and critics, at least we got something good out of it: The original SUPER FLY on Blu-ray! I have yet to watch this particular Blaxploitation title (mainly because I've only dabbled in the sub-genre), but it once I get around to it, I'm gonna buy it on Blu-ray!

Synopsis: Priest is a prince of the streets, a charismatic businessman who wants out of cocaine-dealing. But a mysterious kingpin doesn’t want Priest to change his ways. And that triggers murder, revenge and double-crosses that push Priest into a corner — and heat the neighborhood to flash point.

Super Fly is one of the more enduring streetwise films of its era, due to the dynamic central performance of Ron O’Neal (RED DAWN, ORIGINAL GANGSTAS), the sizzling score by Curtis Mayfield, and the gritty direction of the late Gordon Parks, Jr. (THREE THE HARD WAY, AARON LOVES ANGELA). SUPER FLY is super entertainment with an indelible message. It’s life on the edge, put together by talents who know just how sharp it can get.

Extras:
SUPER FLY just got released today and can be obtained for $18 - $20 from various retailers, including AMAZON, BULLMOOSE, and DIABOLIK DVD!