THE GREAT SILENCE Gets a 2K Restoration for Its 50th Anniversary! Own it on DVD & Blu-ray on June 5th! 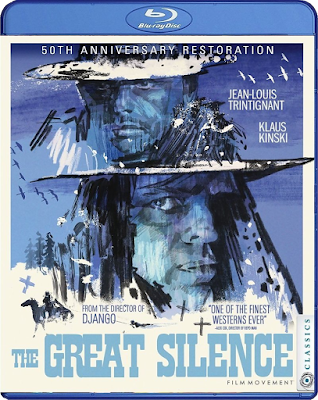 To be perfectly honest Vault Dwellers, the only Sergio Corbucci films I've ever laid eyes on are DJANGO and NAVAJO JOE. I must correct this injustice, and it seems to me that the most logical step is to watch THE GREAT SILENCE, which debuted in theaters back in 1968! This tale of cruel bounty hunters and a silent gunslinging hero was restored in 2K and features some great special features!

Synopsis: On an unforgiving, snow-swept frontier, a group of bloodthirsty bounty hunters, led by the vicious Loco (Klaus Kinski, NOSFERATU, THE VAMPYRE) prey on a band of persecuted outlaws who have taken to the hills. As the price on each head is collected one-by-one, only a mute gunslinger named Silence (Jean-Louis Trintignant, THE CONFORMIST) stands between the innocent refugees and the greed and corruption that the bounty hunters represent. But, in this harsh, brutal world, the lines between right and wrong aren't always clear and good doesn't always triumph.

Featuring superb photography and a haunting score from maestro Ennio Morricone, director Sergio Corbucci's (DJANGO, COMPANEROS) bleak, brilliant and violent vision of an immoral, honorless west is widely considered to be among the very best and most influential Euro-Westerns ever made.

Extras:
The 50th Anniversary restoration of THE GREAT SILENCE is available on Tuesday, June 5th wherever DVDs and Blu-ray discs are sold! Distributed by Film Movement Classics, the DVD runs between $15 - $23 while the Blu-ray is in the $28 - $35 range! Get your copy now from AMAZON, BULLMOOSE, or DIABOLIK DVD!