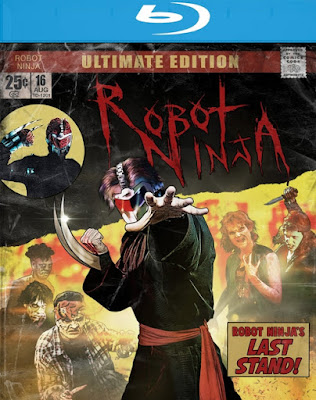 TEMPE ENTERTAINMENT IS RELEASING AN "ULTIMATE EDITION" OF J.R. BOOKWALTER'S LONG OUT OF PRINT INDIE SHOCKER!

Talk about a blast from my past! I came across ROBOT NINJA during my early teen years at a VHS liquidation outlet and bought it solely based upon the cover art. While I didn't end up loving it like I had hoped, the movie certainly left an impression on me.

At least fifteen years have passed since I've seen ROBOT NINJA, so you can imagine my surprise after receiving an e-mail touting its impending return to home video! And now, after a relatively successful IndieGoGo campaign, we're getting this film in a 2-Disc Ultimate Edition that features a 2K restoration, lots of extras, and a soundtrack CD! For the full details of this upcoming release, read onward Vault Dwellers!

Synopsis: Leonard Miller (Michael Todd - THE DEAD NEXT DOOR, LURKING FEAR) is a frustrated artist. His publisher, his agent... everyone is out to capitalize on the blooming success of Robot Ninja, the greatest costumed superhero since Batman! One night, Miller witnesses the brutal rape and murder of a young couple at the hands of ruthless thugs. He cries out for revenge! With the help of an inventor friend, Dr. Goodknight (Bogdan Pecic - THE DEAD NEXT DOOR, ZOMBIE COP), Miller becomes the Robot Ninja, stalking the dark streets of Ridgway, intent on spilling some blood!

The only thing standing in his way is Sanchez (Maria Marcovic - THE DEAD NEXT DOOR) and her band of villains. Relentlessly, Miller pursues his prey, watching the bodies pile up before him. The only thing stopping him is Goodknight, and a frustrated local cop that’s always just one step behind him. Robot Ninja slashes, stabs, guts, pokes and jabs his way through body after body until his final confrontation with head baddie Sanchez. You’ll never see comic books the same way again!

DISC TWO
There is no official release date yet for the Ultimate Edition of ROBOT NINJA and more extras may be added as the months tick by. Ant though it is not listed here, I did read that J.R. Bookwalter is also working on creating a cropped 16:9 Widescreen version for non-purists, but I'm not entirely sure if that will be included here, or released separately.

As more details are revealed about this upcoming Blu-ray, I'll update this post. If you are interested in owning ROBOT NINJA (which has been out of print for nearly thirty years!), you can order a copy exclusively through TEMPE ENTERTAINMENT'S ONLINE STORE!