Scream Factory Brings ALIEN PREDATORS and NIGHT OF THE LEPUS to Blu-ray on June 19th! 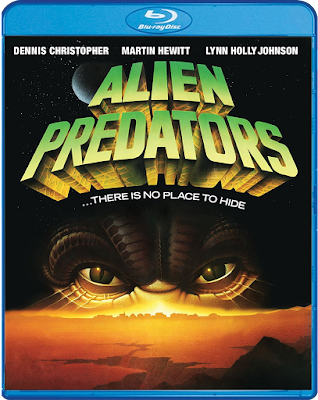 Talk about two must-own titles! NIGHT OF THE LEPUS has long been a guilty pleasure of mine with its ridiculous premise and an incredible cast! ALIEN PREDATORS (aka THE FALLING) is also a film I am quite familiar with as I used to own it on VHS way back in the day.

Interestingly enough, said VHS tape was apparently used as evidence by my Vault Momma in a bitter custody battle over yours truly with her ex-husband! (True story!) Apparently Deran Sarafian's Spanish-American co-production helped tip the scales! (Crazy no?) It's been a long time since I've seen either one of these films, so I definitely have my heart set on picking these titles up at some point! Let's take a closer look at them shall we?

Synopsis: When NASA's Skylab fell to Earth the threat was over ... but five years later the horror is just beginning! Three American teens on a European holiday are about to experience their worst nightmare. They are about to be trapped in a quaint Spanish town infested with a parasitic alien virus that drives the local townspeople insane and turns them into horrible mutants! The three teens must run for their lives ... but is there really anywhere to hide? This chilling sci-fi film stars Dennis Christopher (BREAKING AWAY, FADE TO BLACK) Martin Hewitt (ENDLESS LOVE, TWO MOON JUNCTION), and Lynn-Holly Johnson (ICE CASTLES, FOR YOUR EYES ONLY).

Extras:
ALIEN PREDATORS makes its Blu-ray debut on Tuesday, June 19th and will cost between $18 - $23. (The commentary is probably worth the price of admission alone!) You can order yourself a copy of this once (mostly) forgotten film now at AMAZON, BULLMOOSE, DIABOLIK DVD, or directly from SHOUT! FACTORY. 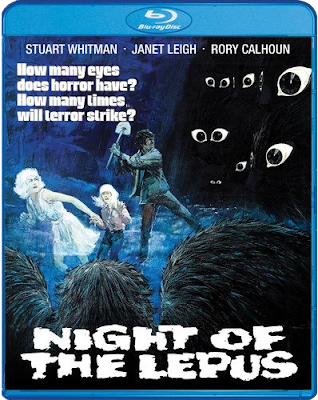 Synopsis: There was no limit to the horror ... no end to the NIGHT OF THE LEPUS! A hormone intended to alter the breeding cycle of rabbits overrunning Arizona ranchlands instead turns them into flesh-eating, 150-pound monsters in NIGHT OF THE LEPUS!

Stuart Whitman (EATEN ALIVE), Janet Leigh (PSYCHO), Rory Calhoun (MOTEL HELL) and DeForest Kelley (Star Trek) are among the intrepid humans facing off against the behemoth bunnies, using guns, flames, dynamite and anything else in their grasp to battle their oversized, hungry tormentors.

Extras:
Those giant bunnies will look twice as nice in 2K, and I guarantee that Lee Gambin's audio commentary will be a non-stop stream of knowledge that will truly enlighten you about NIGHT OF THE LEPUS! This Blu-ray also comes out on June 19th, and should cost between $20 - $24! Order yours now from AMAZON, BULLMOOSE, DIABOLIK DVD, or directly from SHOUT! FACTORY.