THE BRAIN and TARANTULA Now Available on Blu-ray from Scream Factory! 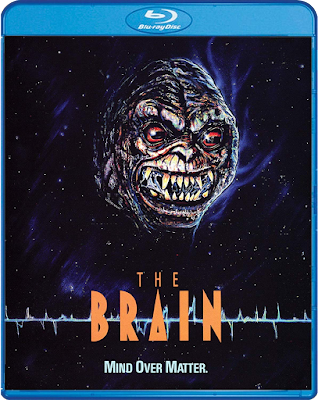 While I'm not ecstatic over Scream Factory's price increases or steelbook double-dips, I do applaud them for their continued efforts in bringing classic sci-fi & Horror fare, as well as obscure 80's cult and exploitation titles, to Blu-ray! Along with their Hammer Horror offerings and IFC Midnight releases, Scream has truly cornered the market on the types of films that I love, and for that reason I continue to support them when I can. Speaking of which, I can't wait to add both THE BRAIN and TARANTULA to my Blu-ray collection!

Synopsis: Imagine a pulsating mass of gray matter, expanding in size and strength as it takes control of human minds and devours human bodies. It could never happen, right? Just watch Independent Thinking, starring Dr. Anthony Blakely (David Gale - RE-ANIMATOR, THE GUYVER, SYNGENOR), a hot new TV program. But as the show's ratings continue to soar, so does the suicide and murder rate among its viewers. What they don't know is that Dr. Blakely has teamed with an alien brain and plans to gain control of all humanity.

Extras:
What? No trailer?! (Just kidding!) WOW is all I have to say about this release Vault Dwellers! For decades I've watched a bootleg DVD-R of this film when the mood hit but now we've got a Blu-ray release that this Canadian Horror oddity can truly be proud of! A new 4K transfer, three audio commentaries, and cast & crew interviews made this one a must-own for yours truly, and I can't wait to watch my copy when it arrives in the mail! Get yours now from AMAZON, BULL MOOSE, DIABOLIK DVD, or directly from SHOUT! FACTORY. 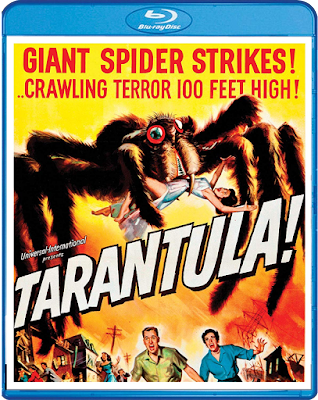 Synopsis: Biochemist Gerald Deemer (Leo G. Carroll, who's over a barrel - NORTH BY NORTHWEST) has a plan to feed the world by using a growth formula on plants and animals. Instead he creates terror beyond imagining when his work spawns a spider of mammoth proportions!

Feeding on cattle and humans, this towering tarantula has the people of Desert Rock, Arizona running for their lives. Can this horrifying creature be stopped or will the world succumb to its giant claws? This classic sci-fi film from director Jack Arnold (CREATURE FROM THE BLACK LAGOON, IT CAME FROM OUTER SPACE) stars John Agar (THE MOLE PEOPLE, ATTACK OF THE PUPPET PEOPLE) and Mara Corday (THE BLACK SCORPION, THE GIANT CLAW), and features a cameo by Clint Eastwood as a jet squadron leader!

Extras:
Though rather light on extras, Scream Factory still gave this classic creature feature more love than Universal ever did! Get TARANTULA on Blu-ray today from AMAZON, BULL MOOSE, DIABOLIK DVD, or directly from SHOUT! FACTORY.