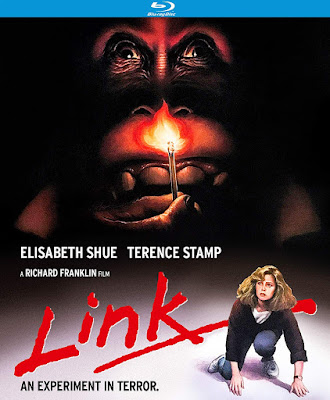 I haven't seen LINK in nearly two decades but recall very much enjoying this tale of an intelligent orangutan that becomes a vicious killer! In fact, I'd even go as far to say that it is far better than both MONKEY SHINES and SHAKMA, which have both recently seen a resurgence in popularity. Don't believe me? Then you'll just have to pick up a copy of LINK to see for yourself!

Young graduate student Jane Chase (Shue) becomes the new assistant to an eccentric zoology professor (Stamp) at the remote home he shares with two brilliant chimpanzees and an elderly orangutan butler named Link. But when one of the chimps is found dead and the professor mysteriously disappears, Link becomes dangerously aggressive towards Jane. Now, the time for “monkey business” is over and the true terror is about to begin.

Extras:
LINK is definitely on my list of new must-own titles and I look forward to adding this Special Edition to my collection down the road! But that doesn't mean YOU have to wait to own it! If you've got a spare $18 - $20 in your bank account, order your copy now from AMAZON, BULL MOOSE, DIABOLIK DVD, or directly from KINO LORBER!