Now on Blu-ray: Obsess Over Morgan Fairchild in THE SEDUCTION! 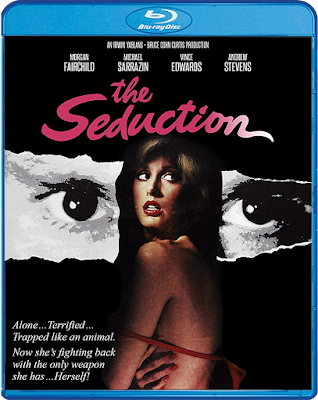 Chalk up yet another Scream Factory release that I haven't seen before Vault Dwellers! This one sounds like it'll pair nicely with various other similarly-themed Scream titles already occupying my shelves, like THE CRUSH, NEW YEAR'S EVIL, VISITING HOURS, or even SATURN 3! On the fence about adding this one to your personal collection? Then let's take a closer look at this classic thriller from the director of such films as PUPPETMASTER, CRAWLSPACE, TOURIST TRAP, and CATACOMBS.

Synopsis: L.A. anchorwoman Jamie Douglas (the stunning Morgan Fairchild in her big screen debut) has it all: a glamorous career on a top-rated news show, a luxurious house in the hills, and a devoted young admirer named Derek (Andrew Stevens). But when Jamie rebuffs his romantic advances, Derek becomes an obsessed stalker who plays out an increasingly psychotic courtship with the frightened newswoman.

Soon he is threatening every part of her life, secretly watching even her most intimate moments. Her tough-talking lover (Michael Sarrazin) can't console her. A by-the-book cop (Vince Edwards) can't protect her. But Jamie is far from helpless ... and ready to fight back with all the weapons at her command. When the smoke clears ... who will survive THE SEDUCTION?

Extras:
Scream Factory's Blu-ray of THE SEDUCTION is now available wherever Blu-ray discs are sold and should cost between $23 - $28. To add this title to your own Scream Factory catalog, order a copy now from AMAZON, BULL MOOSE, DIABOLIK DVD, or directly from SHOUT! FACTORY.