Scream Factory has CHOSEN to Unleash HOLOCAUST 2000 on Blu-ray Disc! 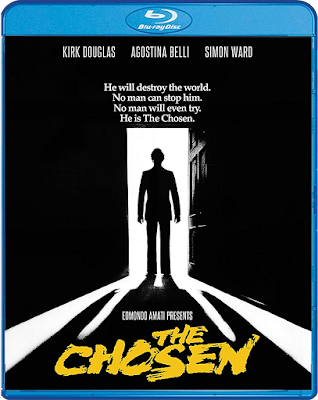 I have never seen THE CHOSEN, but seeing as it has been compared to THE OMEN I'll most likely give it a look! It seems to mix the fears of nuclear disaster with supernatural shocks, which makes it rather  unique when compared to various other films involving world-ending scenarios and antichrists! If that sounds like your cup of tea, then read on to learn more about this movie and it's new Blu-ray release!

Synopsis: Kirk Douglas (THE FURY) stars as industrialist Robert Caine, who with his son Angel (Simon Ward - SUPERGIRL) is finally about to realize his biggest dream: a massive nuclear power plant in the Holy Land. But soon, Caine's dream becomes a horrific nightmare as person after person associated with the project meets a violent, gruesome death. When clues to this inexplicable turn of events point to the devil, Caine comes to the terrible realization that he might be linked to the Antichrist ... perhaps even through his unborn child.

Also known as HOLOCAUST 2000 and RAIN OF FIRE, this riveting thriller in the vein of THE OMEN "is probably the best made and best budgeted of the Italian occult films of the 1970s" (The Science Fiction, Horror and Fantasy Film Review) and was directed by cult filmmaker Alberto De Martino (THE ANTICHRIST, BLOOD LINK, and SHADOWS IN AN EMPTY ROOM).

Extras:
I definitely have a keen interest in this new Scream Factory title Vault Dwellers, especially since there are TWO cuts of the film on this disc! THE CHOSEN is currently available wherever Blu-ray discs are sold and should cost between $20 - $24! Get yourself a copy now from AMAZON, BULL MOOSE, DIABOLIK DVD, or directly from SHOUT! FACTORY.