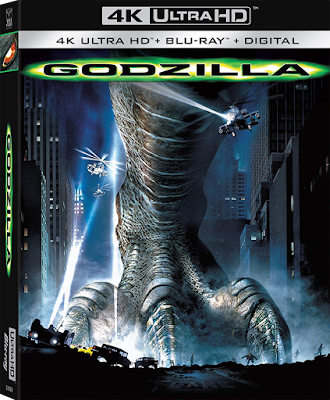 SONY CELEBRATES THE 20TH ANNIVERSARY OF THIS MUCH-MALIGNED FILM WITH A NEW 4K BLU-RAY RELEASE!

I can still remember the excitement and anticipation I had for Sony's GODZILLA back when I was sixteen years old! Promising a brand-new redesign of my childhood hero in his first American feature film, I counted down the days until it hit theaters, saving very newspaper article and ad for it that I could find! To me, this was going to be an important moment in cinematic history and I was going to have all the documentation on it that I could scrape together!

And then the film finally came out and... the disappointment was crushing. But that was twenty years ago, and I've since moved on and don't quite hate this film nearly as much as I used to. In fact, I've recently defended the monster (not the movie) because I think that "Zilla" deserves more love! That being said... OF COURSE I'm going to be adding this to my Godzilla movie collection as soon as I get some more expendable income!

Synopsis: Following French atomic bomb tests in the South Pacific, an unknown creature is spotted passing through the Panama Canal. Scientist Niko Tatopolous (Matthew Broderick) is called in to investigate the matter, and he quickly arrives at the conclusion that a giant, irradiated lizard has been created by the explosions. "Godzilla" then makes its way north, landing in Manhattan to begin wreaking havoc in the big city.

Extras:
While it's kind of light on extras (which seems to be an annoying trend with older films coming to the 4K UHD format), the greatly improved picture and audio quality are enough to make me consider double-dipping on this particular giant monster movie. GODZILLA '98 is currently available wherever 4K discs are sold, and should cost somewhere in the neighborhood of $20. If you're a Godzilla completionist and find yourself compelled to upgrade from your current DVD or Blu-ray, order a copy now from AMAZON or BULL MOOSE!