Now Available on Blu-ray - BLACK MOON RISING! Super Cars, Dueling Thieves, and One of the Greatest Casts Ever Assembled! 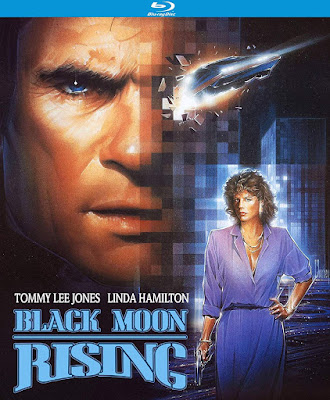 On paper, BLACK MOON RISING seems like it just has to be one of the greatest films ever made! Directed by Harley Cokeliss (BATTLETRUCK, DREAM DEMON, MALONE) this film was written by John Carpenter, scored by Lalo Schifrin, and stars Tommy Lee Jones, Linda Hamilton, Robert Vaughn, Bubba Smith, Nick Cassavetes, Keenan Wynn, Richard Jaeckal, and several other familiar faces!

I saw this movie on VHS many years ago and don't remember a thing about it (other than I think I liked it?), but I'm eager to revisit BLACK MOON RISING based solely upon the talent on both sides of the camera!

Synopsis: When master thief Sam Quint (Tommy Lee Jones - THE FUGITIVE, BLOWN AWAY, THE PARK IS MINE) is hired by the government to steal top-secret data from a crime organization, he hides the stolen data in the experimental supercar, The Black Moon. But when the car is then stolen by high-tech auto thief Nina (Linda Hamilton - THE TERMINATOR), Quint must pull off the most daring heist of all: break into an impenetrable skyscraper and steal it back. With time running out and all sides closing in, Quint and Nina take The Black Moon on one final ride towards a shattering climax of sky-high suspense.

Extras:
Kino Lorber's Special Edition of BLACK MOON RISING looks pretty awesome - I think I'll be adding it to my collection at some point! (The Lee Gambin commentary alone is probably worth the $18 - $20 pricetag!) If this movie sounds like it's up your alley, then order a copy now from AMAZON, BULL MOOSE, or DIABOLIK DVD!