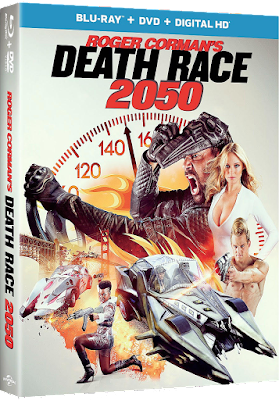 I get an absolute kick out of the original DEATH RACE 2000 (which I just watched in 35mm at Hudson Horror Show this past December)! While I don't think this reboot will hold a candle to the original classic, I feel pretty confident that it'll be worth watching. What can I say? I'm a Corman fan!

Synopsis: Legendary filmmaking icon, Roger Corman, is back with his most outrageous film yet in this sensational, action-packed and darkly humorous reboot of the original DEATH RACE 2000! It's the year 2050 and America is controlled by an all-powerful corporate government ruled by The Chairman (Malcolm McDowell).

The masses have been brainwashed with violent virtual-reality entertainment. The event of the year is the "Death Race," in which a motley crew of violent drivers compete in a cross-country road race, scoring points for shamelessly running people over and driving each other off the road. The reigning champion and fan favorite, Frankenstein (Manu Bennett), who's half-man half-machine, wants to take the crown, but his rebel spy co-pilot threatens his legacy.

Extras:
Corman's DEATH RACE 2050 will be available wherever discs are sold on Tuesday, January 17th! You can order a copy now from AMAZON or BULLMOOSE! Wait, what's that? You haven't seen the original 1975 classic?! Remedy that ASAP!