Arrow Video Brings Down the HOUSE (Collection) in March! 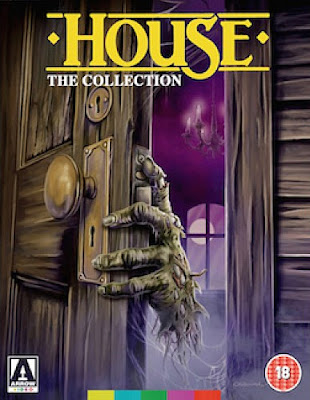 Egads! I never thought I'd see the day where fans would get complete sets of ANY Horror franchise, let alone the likes of FRIDAY THE 13TH and HALLOWEEN. And now here I am telling you about Arrow Video's upcoming HOUSE: THE COMPLETE COLLECTION, which contains ALL FOUR "HOUSE" FILMS!

HOUSE and HOUSE II: THE SECOND STORY have primarily been available in North America on DVD (originally released by Anchor Bay), and HOUSE III (aka THE HORROR SHOW) was recently brought to Blu-ray by Scream Factory! HOUSE IV has, to my knowledge, never seen a legit release since it's VHS days! So you can imagine how freakin' excited I am right now!

Btw, it's important to note that this release is Region B-locked! So if you don't have a region free player, get one before the end of March! Otherwise, Arrow Video's U.S. label is offering up a nice double feature of HOUSE and HOUSE II for those that aren't completionists! But enough chatter! Scroll down to see all the juicy details of this incredible 8-disc set (4 DVDs & 4 Blu-rays!), and be sure to pre-order it ASAP from ARROW VIDEO'S WEBSITE! 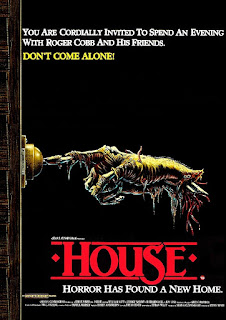 Synopsis for HOUSE (1986): In the original HOUSE, William Katt (Carrie) stars as Roger Cobb, a horror novelist struggling to pen his next bestseller. When he inherits his great aunt’s creaky old mansion, Roger decides that he might just have found the ideal place in which to get some writing done. Unfortunately, the house’s vindictive supernatural residents have other ideas… 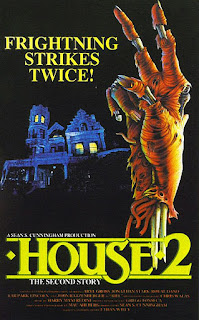 Synopsis for HOUSE II: THE SECOND STORY (1987): Young Jesse (Arye Gross) moves into an old family mansion where his parents were mysteriously murdered years before. Plans for turning the place into a party pad are soon thwarted by the appearance of Jesse’s mummified Great Grandpa (Royal Dano), his mystical crystal skull, and a zombified cowboy named Slim Razor, who’ll stop at nothing to lay his hands on it! 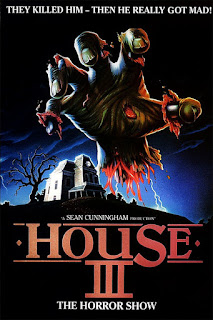 Synopsis for HOUSE III: THE HORROR SHOW (1989): Lance Henriksen (ALIENS) stars as a detective who sends a sadistic serial killer to the electric chair, only to find himself stalked by the maniac from beyond the grave. Released six months before SHOCKER, this HOUSE sequel-in-name-only failed to attain the cult status of Wes Craven's oddball Horror film. 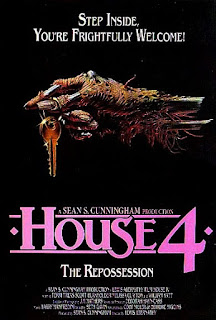 Synopsis for HOUSE IV: THE REPOSSESSION (1992): William Katt reprises his role as Roger Cobb, and returns to the fold for one last terrifying tale mixing seedy mobsters, Native American spirits, and a singing pizza! Released direct-to-VHS in 1992, this is the Blu-ray debut of this final addition to the HOUSE saga!

Once again this awesome set is REGION B locked, and currently only available through ARROW VIDEO and ZAAVI. Each film has been newly restored in 2K, plus this set boasts a  set also comes with The House Companion, a collectible limited edition 60-page book featuring new writing on the entire HOUSE franchise by researcher Simon Barber, alongside a wealth of archive material!

Now for those of you who aren't ready to purchase a new player and have this bad boy shipped from overseas, Arrow Video is also releasing HOUSE: TWO STORIES, a double feature Blu-ray set that contains the first two films. (Due out on March 21, 2017!) The extras and specs for this 2-disc set are identical to their UK counterpart, and this double feature will include the The House Companion. Order this Arrow U.S. release today, from AMAZON, DIABOLIK DVD, or BULLMOOSE.COM!