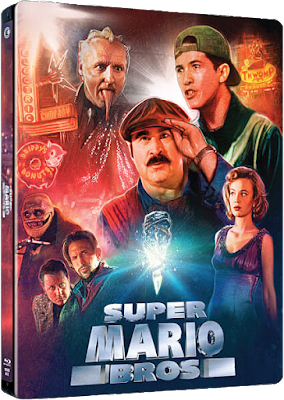 THE AIN'T NO GAME, IT'S A LIVE-ACTION CLUSTERF*CK! SECOND SIGHT FILMS RELEASES THE INFAMOUS "SUPER MARIO BROS" MOVIE IN A LIMITED EDITION STEELBOOK ON
FEBRUARY 13TH!

Few things were as disappointing to a very young Vault Master than 1993's SUPER MARIO BROS. - THE MOVIE. It's hard to believe that this awful adaptation of a popular video game franchise came out the same year as the ground-breaking JURASSIC PARK!

But you know what? As bad as it is, I kind of love this movie. In some sick, twisted way, I enjoy it, and I simply must have it in my Blu-ray collection! The only problem is that this disc is Region B encoded, so it looks like I'll be snapping up a region free Blu-ray player in the very near future!

Synopsis: Brooklyn plumbers Mario (Bob Hoskins) and Luigi (John Leguizamo) get the shock of their lives when they discover a parallel world populated by the intelligent descendants of dinosaurs! It seems they weren't destroyed by a meteor millions of years ago but hurled into another dimension and now have plans to rule our world. It's up to our unlikely heroes to battle the evil King Koopa (Dennis Hopper) and his Goomba guards, free the beautiful Princess Daisy (Samantha Mathis), and save mankind in this adventure of a lifetime!

Extras:
The new SUPER MARIO BROS. Limited Edition Steelbook is currently a ZAVVI exclusive and can only be ordered HERE. The cost is fifteen pounds (or $19.67 in U.S. currency) + shipping and once again, this disc is Region B locked, which means that you must have a Region Free player to enjoy(?) this Blu-ray! And if twenty bucks is too rich for your blood, you can get a much cheaper standard Blu-ray release (also Region B) HERE at Amazon.com!