Now on Blu-ray Disc: Nothing Will Prepare You For THE HAND! 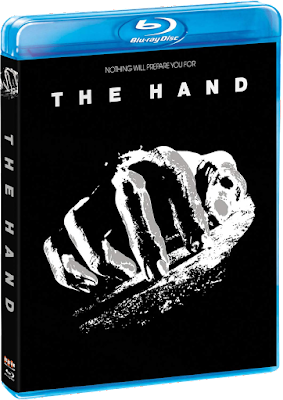 Initially available on a stand-alone DVD from Warner Bros. (and a 4-film set featuring DEADLY FRIEND, EYES OF A STRANGER, and SOMEONE IS WATCHING ME), Scream Factory gives THE HAND a much-needed upgrade with an all-new 2K scan of the interpositive, plus multiple new cast & crew interviews! I've honestly missed out on seeing this one myself (seems like it'd go well with IDLE HANDS or DEMONOID!), so I'll definitely be picking this title up at some point! Never heard of it or on the fence about adding this disc to your collection? Then let's take a closer look at THE HAND, shall we Vault Dwellers?

Synopsis: A gifted cartoonist's life comes apart at the seams when his drawing hand is accidentally severed. Slowly, painfully, he tries to adjust ... but a terrifying evil creeps into his consciousness. And one by one, the people who stand in his way begin to die. Written and directed by Academy Award winner Oliver Stone, this spellbinder showcases a vivid central performance by Michael Caine and wonderfully ghoulish special effects by veteran macabre master Carlo Rambaldi. Stone called for more than 30 different hands to be designed, all used in different – and fantastically horrific ways.

Scream Factory's new release of THE HAND is currently available wherever Blu-ray discs are sold, and should cost between $25 - $28! Grab yourself a copy today from AMAZON, BULL MOOSE, DIABOLIK DVD, or directly from SHOUT! FACTORY.