This June, Get a Double-Dose of Classic Toho Sci-Fi on Blu-ray! 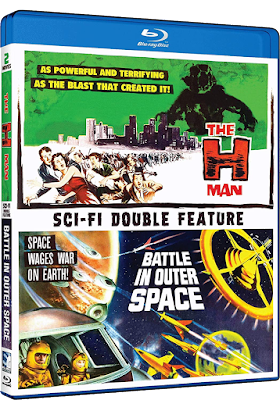 MILL CREEK ENTERTAINMENT BRINGS ISHIRO HONDA'S "THE H-MAN" AND "BATTLE IN OUTER SPACE" TO BLU-RAY IN A MUST-OWN DOUBLE FEATURE!

Having had a lot of success with their releases of MOTHRA and the seemingly endless ULTRAMAN series, Mill Creek is bringing two more Toho classics to Blu-ray! While BATTLE IN OUTER SPACE has been previously released to Blu-ray disc by Sony, THE H-MAN is making its debut on the format and comes with both the U.S. and Japanese cuts of the film! If you're a fan of Golden Age Japanese sci-fi cinema, you will definitely want to pick this 2-disc set up on June 9th!

Synopses: Travel back to the days before CGI, when special effects were real and the results were spectacular! Director Ishirô Honda and special effects wizard Eiji Tsuburaya bring these wildly colorful kaiju eiga (monster movies) to life in this high-definition double feature presentation!

THE H-MAN (1958) - Brought on by hydrogen bomb fallout, H-Man is a slimy green monster that dissolves human tissue and anything else in its path on contact. Scientists must figure out how to stop this creation!

BATTLE IN OUTER SPACE (1958) - The nations of the Earth unite in a common cause to fight off an invader from outer space, reflecting director Ishiro Honda's favorite theme of international cooperation!

Extras:
I already own the Sony Pictures Blu of BATTLE IN OUTER SPACE, but I'm highly considering picking up this double feature just for THE H-MAN! I could not find any info about special features (so I may be updating this post as the street date nears), but I'm hoping we at least get the commentary track for BATTLE ported over from the Sony disc, and maybe trailers for each movie. Even if this double-feature is a bare bones release, the $12 - $15 sale price makes this release a heck of a bargain!

If you enjoy Japanese tokusatsu flicks, then you'll definitely want to grab a copy of THE H-MAN & BATTLE IN OUTER SPACE! Get this double-feature set on June 9th from AMAZON, BULL MOOSE, or DIABOLIK DVD!