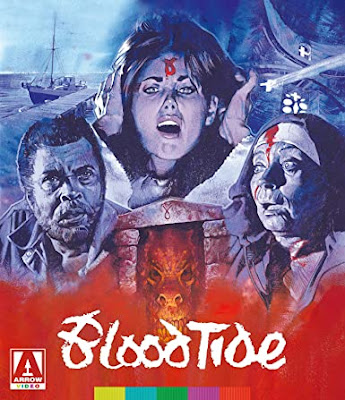 Before you say anything, yes I know that Arrow also just dropped their SOLID METAL NIGHTMARES boxed set today featuring ten films by Shinya Tsukamoto that is loaded with extras! But after posting about Severin's gi-normous Al Adamson set last Sunday, I didn't have the strength to break down another large collector's set! Instead, I'll focus my efforts on Arrow's three other new titles this week, which include BLOOD TIDE (starring James Earl Jones, and produced by infamous ISLAND OF DEATH director Nico Mastorakis!), WHITE FIRE (a heist flick starring Robert Ginty and Fred "The Hammer" Williamson), and Lucky MeKee's THE WOMAN! To learn more about these new Arrow titles, just continue onward Vault Dwellers!

Synopsis: When treasure hunter Frye (James Earl Jones) accidentally awakens an ancient sea monster that has been lying dormant on a Greek island, the inhabitants are forced to resume the practice of sacrificing virgins in order to placate the demonic creature. Meanwhile a couple, Neil and Sherry, arrive on the island in search of Neil's missing sister, Madeline.

Written and produced by Nico Mastorakis - the man behind such genre favourites as ISLAND OF DEATH, THE ZERO BOYS, THE WIND, and many others - and directed by Richard Jefferies (screenwriter of SCARECROWS and TRON: LEGACY), BLOOD TIDE is a suspense-filled creature feature surging with blood, nudity, and beachside aerobics!

Extras:
Long relegated to a stream of fullscreen bargain-basement DVD releases, BLOOD TIDE finally gets the love it deserves in this new Arrow release! This obscure creature feature should cost between $24 - $28, and is now available to purchase from AMAZON, BULL MOOSE, or DIABOLIK DVD! 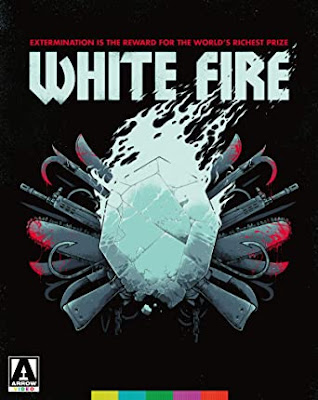 Synopsis: Robert Ginty (THE EXTERMINATOR) and Belinda Mayne (KRULL) play Bo and Inga, brother and sister jewel thieves who target the legendary "White Fire" diamond a priceless rock so hot it actually burns those who try to lay their hands on it!

When tragedy strikes, Bo undertakes an outrageous plan involving plastic surgery and explosives to infiltrate the mine where the diamond awaits. Bo s plan hits an unexpected snag with the arrival of smooth-talking badass Noah Barclay, played by Fred Williamson (FROM DUSK TIL DAWN). Noah s hunting for a missing prostitute and he thinks Bo and Inga hold the key to her disappearance!

Extras:
Arrow's WHITE FIRE looks like a must-see in my book, what with mustachioed Robert Ginty straight up slaying henchmen with a chainsaw! This Blu-ray should cost you between $24 - $28, and is now available through most online retailers, including AMAZON, BULL MOOSE, and DIABOLIK DVD! 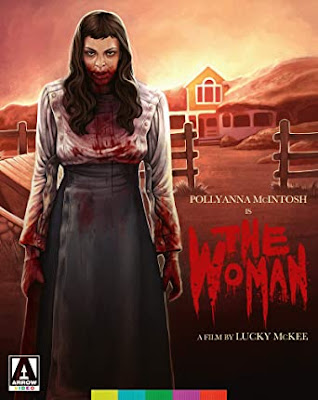 Synopsis: Almost a decade after Lucky McKee burst upon the indie horror scene and became a 'Master of Horror' in the making thanks to his directorial debut May, he teamed up with legendary cult author Jack Ketchum for his most shocking and brutal film to date: THE WOMAN, an instant cause célèbre on its Sundance premiere.

THE WOMAN (Pollyanna McIntosh - The Walking Dead) is the last surviving member of a deadly clan of feral cannibals that has roamed the American wilderness for decades. When successful country lawyer Chris Cleek (Sean Bridgers - ROOM) stumbles upon her whilst hunting in the woods, he decides to capture and "civilize" her with the help of his seemingly perfect all-American family, including his wife Belle (Angela Bettis - MAY) and daughter Peggy (Lauren Ashley Carter - DARLING). The Cleeks will soon learn, however, that hell hath no fury like THE WOMAN scorned…

Extras:
This standard release of THE WOMAN (which lacks the second feature found on the Limited Edition release, namely OFFSPRING) is a definite must-own for fans of the film! This single-disc release will cost you between $24 - $28 and can be obtained from AMAZON, BULL MOOSE, and DIABOLIK DVD!