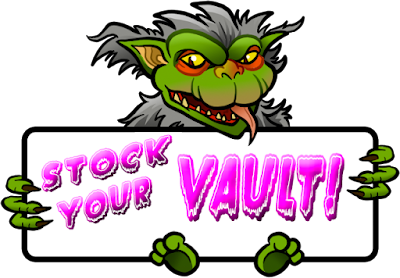 Now that we're back into the swing of things here at The Vault, it's time for another weekly edition of our STOCK YOUR VAULT column! This week has a pretty small lineup of new releases, but as always, there are a few must-haves lurking about!

Dark Force Entertainment's latest Blu-ray offering is TEENAGE HITCHHIKERS, The Film Detective finally releases their delayed 40th Anniversary Limited Edition of FIST OF FEAR, TOUCH OF DEATH (on May 15th), and Scorpion Releasing brings SHADOW PLAY to both DVD & Blu-ray today! For those of you looking for something more recent to add to your collection, you can now own BIRDS OF PREY, Blumhouse's FANTASY ISLAND, and VIVARIUM on DVD or Blu-ray!

Scream Factory's lone title this week is their new Collector's Edition of IDLE HANDS, which boasts a new audio commentary and multiple cast & crew interviews, and it would have been my pick of the week, had Warner Archive Collection not released THE MYSTERY OF THE WAX MUSEUM. Boasting an all new restoration and several bonus features, this movie (which was once considered a "lost film") this proto-HOUSE OF WAX has never looked so good!

There are still multiple DVD & Blu-ray titles out today that I haven't mentioned gang, so be sure to scroll down to see the full roster!


NEW MULTI-FILM COLLECTIONS ON BLU-RAY
Film Noir: The Dark Side of Cinema II
Contains: Thunder on the Hill, The Price of Fear, and The Female Animal.