Get Your Bruceploitation Fix This Week from VCI and The Film Detective! 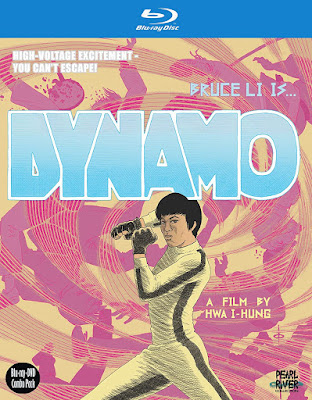 A BRUCE LI CLASSIC AND, WHAT SOME HAVE DUBBED THE "WORST BRUCEPLOITATION FILM OF ALL TIME," MAKE THEIR BLU-RAY DEBUTS ON MAY 12TH & 15TH!

After the unexpected passing of Bruce Lee in 1973, there was a mad dash to fill the void he had left behind, resulting in a bizzaro film sub-genre known as "Bruceploitation." Various pretenders to Bruce's throne (e.g. Bruce Li, Bruce Le, Dragon Lee, Bruce Lai, Bruce Liang) earned lead roles in martial arts films that were made to capitalize on the popularity of the deceased martial arts superstar. Some of these include RE-ENTER THE DRAGON, BRUCE LEE FIGHTS BACK FROM THE GRAVE, THE CLONES OF BRUCE LEE, RETURN OF THE FISTS OF FURY, THE DRAGON LIVES AGAIN, and the two films I'm posting about today, namely DYNAMO and FIST OF FEAR, TOUCH OF DEATH!

DYNAMO is part of VCI's "Pearl River Collection" and features an all new 2K restoration of the Bruce Li vehicle with new bonus features! FIST OF FEAR, TOUCH OF DEATH from The Film Detective is limited to 1,500 copies and offers up a new 4K restoration (made from an original film print) and a making-of featurette! If either of these sound the slightest bit enticing, then continue reading to get the full details of both of these Bruceploitation "classics!"

Synopsis: When a cab driver is discovered by corrupt producers as a successor to super star Bruce Lee, they find his rebellious and individual nature may be too much for even their massive enterprise to contain. This fan favorite in the sub-genre of Bruceploitation stars Ho Tsung-Tao (Bruce Li), Ku Feng, and Chiang Tao. DYNAMO was directed by THE SUPER INFRAMAN helmer, Hua Shan.

Extras:
There was initially going to be a new mini-documentary entitled The Taiwan Connection on this disc, but it is apparently in the process of being expanded upon and should be popping up on a future "Pearl River Collection" release. Still, with two cuts of the film, multiple audio options & commentary, and a handful of featurettes, this seems like a pretty solid release! DYNAMO is now available to own on Blu-ray and should cost between $20 - $22! Get a copy today from AMAZON, BULL MOOSE, or DIABOLIK DVD! 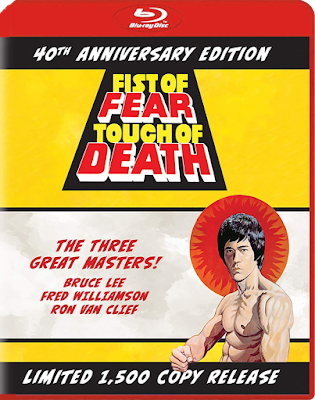 Synopsis: Action-packed FIST OF FEAR, TOUCH OF DEATH is celebrating its 40th anniversary like never before with a stunning 4K restoration and never before seen special features! This film was first presented in 1980 by veteran distributor and producer Terry Levene and director Matthew Mallinson. FIST OF FEAR, TOUCH OF DEATH places the 1979 World Karate Championship at center stage, where martial artists take their shot at eliminating the competition and claiming the title of “Successor to the Bruce Lee Legacy.”

FIST OF FEAR, TOUCH OF DEATH combines eye-popping combat scenes and archival footage of Lee himself, with mockumentary-style interviews hosted by Academy Award nominee Adolph Caesar and a martial arts masters Fred Williamson, Ron Van Clief, and more as they emerge from every corner of the martial arts world to give their take on whether any competitor could be deemed worthy of the Bruce Lee legacy.

Extras:
Originally intended for a March 31st release, the recent Covid-19 pandemic forced The Film Detective to delay their 40th Anniversary Limited (to 1,500) Edition until Friday, May 15th! FIST OF FEAR, TOUCH OF DEATH costs between $20 - $24 and can currently be ordered through AMAZON, BULL MOOSE, or directly from THE FILM DETECTIVE!