WITCHES IN THE WOODS: Evil Awaits You in Early June on DVD & Blu-ray! 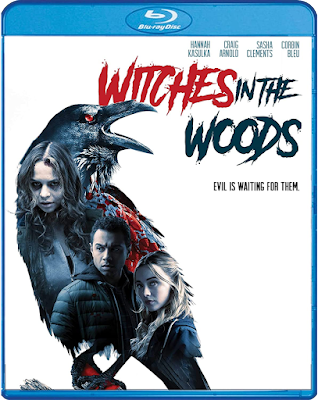 Up until now I had never heard of this movie which, from what I've gathered from its trailer, appears to be a mixture of THE BLAIR WITCH PROJECT and Adam Green's FROZEN. If that sounds like a good time to you, then read on to learn more about this film and its (bare bones) release.

Synopsis: Jill, a tenacious college freshman, abandons her studies for an off-the-grid snowboarding trip with her friends. But after the sun has dipped below the horizon, their SUV mysteriously becomes lost in the freshly logged mountains, eventually running out of gas and leaving them stranded. As the temperature falls, the tension within the group ratchets up ... and a metaphorical — then all-too-literal — witch hunt ensues.

Extras:
Scream Factory's Blu-ray (and DVD) release of WITCHES IN THE WOODS arrives at all Blu-ray retailers on Tuesday, June 2nd, and should cost between $16 - $18! Order a copy today from AMAZON, BULL MOOSE, or directly from SHOUT! FACTORY.