On June 16th, THE HILLS RUN RED With the Blood of Babyface's Victims! 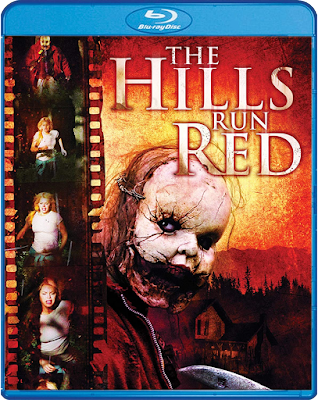 I've got to be honest Vault Dwellers... I forgot this movie existed. I remember it being released to DVD over a decade ago, and remember seeing it on the shelves of various retailers.... but I just never got around to watching THE HILLS RUN RED, even though it came highly recommended from other Horror fans. But now that Scream Factory is giving it a LOT of love, I think it's time for me to give this overlooked indie slasher a shot! Whether you're just now hearing about this film, or are already a fan of it, I think you will all be super impressed by the effort that was put into this upcoming Scream Factory release!

Synopsis: You heard the story. The one about the goriest, bloodiest splatter flick ever, the one made in the '80s but mysteriously lost. Flash forward to now: Young cinema buffs search for the secret location where the movie was shot, hoping to find the film. What they find is that the goriest, bloodiest splatter flick ever is more than a movie. It's real. And it's happening to them. THE HILLS RUN RED vaults into a whole new level of horror as the terrified interlopers confront a demented killer who covers his hacked-up face with a baby doll mask. Wait, Babyface is just a character from the movie, right? Wrong. He's alive. He's waiting. He's thrilled to meet fans who will die – slowly, gruesomely, shockingly – for his art. Get ready to meet a new horror icon, Babyface!

Extras:
If you're a fan of this movie, you're probably losing your mind right now! Personally, I'm absolutely amazed at the number of bonus features on this disc, especially when previous Scream Factory Collector's Edition titles have been a bit on the barren side! ( cough* APRIL FOOL'S DAY *cough ) THE HILLS RUN RED will be released on Tuesday, June 16th and should cost between $20 - $28! Secure your copy today by ordering this disc from AMAZON, BULL MOOSE, DIABOLIK DVD, or directly from SHOUT! FACTORY.