Want to be the Life of the Party? - Add APRIL FOOL'S DAY to Your Blu-ray Collection Today! 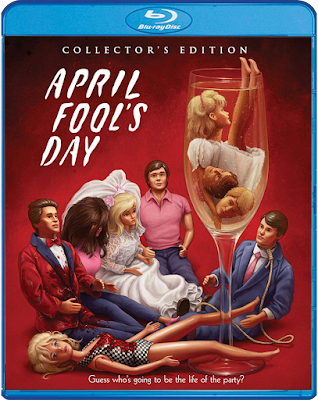 During the big slasher boom of the 80s, filmmakers were constantly trying to up the body counts of their films, or find new ways to murder people onscreen. It was a wonderful era of "anything goes" with producers throwing money at just about any fright flick, no matter how absurd the premise, or outrageous the kills! In the midst of all of this, came Fred Walton's little mystery-chiller APRIL FOOL'S DAY. Once a black sheep of the slasher sub-genre, this low-budget whodunnit has since earned a faithful cult following! And now, thanks to Scream Factory, APRIL FOOL'S DAY has finally made the leap to Blu-ray disc! Let's take a closer look Vault Dwellers!

Synopsis: When Muffy St. John (Deborah Foreman - VALLEY GIRL) invited her college friends up to her parents' secluded island home for the time of their lives, she just forgot to tell them it just might be the last time of their lives.

As soon as the kids arrive on the island, someone starts trimming the guest list ... one murder at a time. And what starts out as a weekend of harmless "April Fool's Day" pranks turns into a bloody battle for survival.

It's just what you'd expect from the producer who brought you BODY PARTS, SPECIES, and three of the FRIDAY THE 13TH films!

Extras:
Though a bit scanty on extras (especially for a Collector's Edition), this is still a disc I want to add to my growing collection of physical media as I kind of love this movie! APRIL FOOL'S DAY is now available wherever Blu-rays are sold and should cost between $28 - $31! Grab a copy today from AMAZON, BULL MOOOSE, DIABOLIK DVD, or get it direct from SHOUT! FACTORY.