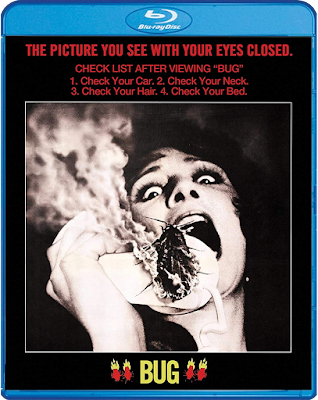 Though I haven't seen it in some time, BUG was one of the many "natural horror" films I grew up with back in the day, so naturally I have a soft spot for it. I am also equally excited for INSEMINOID, a film that has eluded me for decades. I mean come on: A British exploitation knock-off of Ridley Scott's ALIEN? I just gotta have it! Unfortunately, I have to cut way back on spending (since yours truly will be come a proud poppa six months from now), so I'll have to wait a while before I can add these to my collection. But that doesn't mean you do! Whether you're a longtime fan of these films, or are just now hearing about them, continue reading to get the full details of these newest inductees into Scream Factory's insane film catalog!

Synopsis: Legendary horror writer/producer/director William Castle (THE TINGLER, STRAIT-JACKET, ROSEMARY'S BABY) presents a creeping, crawling film nightmare that will have you screaming and squirming with fright! A massive earth tremor opens a crevasse in the California desert, releasing a plague of bizarre, fiery, foot-long cockroaches.

With their numbers multiplying and the death toll mounting, obsessive entomologist James Parmiter (Bradford Dillman - PIRANHA, THE SWARM) desperately seeks a way to eliminate the seemingly indestructible critters before they spread clear across the country ... and beyond! Joanna Miles (THE DARK SECRET OF HARVEST HOME) and Patty McCormack (THE BAD SEED) are among the terrorized cast in this suspenseful screamfest directed by Jeannot Szwarc (JAWS 2).

Extras:
Though this release isn't overflowing with special features, the fact that BUG made the leap to HD is enough reason for yours truly to pick up a copy! Speaking of which, BUG should cost in the $23 - $24 range, and can be obtained from AMAZON, BULL MOOSE, DIABOLIK DVD, or directly from SHOUT! FACTORY. 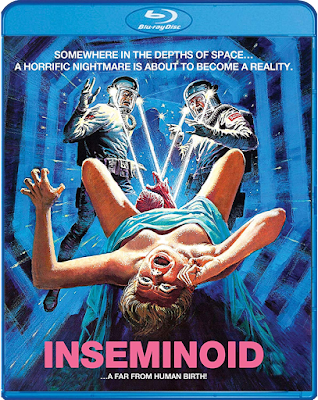 Synopsis: An alien creature has been waiting millions of years for a chance to breed, and its time has finally come when a group of space explorers unwittingly lands on its home planet. The 12-member crew is investigating for possible origins for the planet's vanished civilization.

Instead, they awaken the planet's creature and discover that the horror to come is more terrifying than any nightmare that they could ever imagine!

Extras:
For those of you wondering if Scream Factory was going to port over all the extras from the region free Indicator release, then wonder no more - they're all here with two new additions! This new Blu of INSEMINOID should cost between $23 - $28, and readily available from AMAZON, BULL MOOSE, DIABOLIK DVD, and SHOUT! FACTORY.