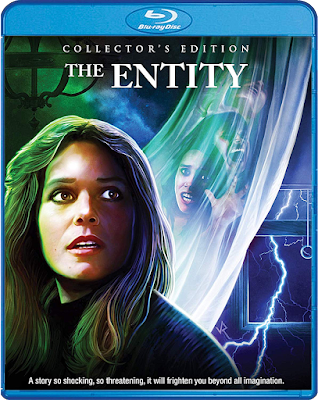 It's week's like this, that I wish I had way more expendable income! On June 11th (i.e. tomorrow!) Scream Factory is unleashing new Collector's Editions of THE ENTITY and FRANKENSTEIN CREATED WOMAN (both of which I really need to see), as well as a Limited Edition Steelbook of Joe Dante's PIRANHA, which comes with a new 4K transfer, Roger Corman commentary, and (if you order directly from Shout! Factory) an exclusive lithograph! Continue reading about this trio of new releases to get even more excited Vault Dwellers!

Synopsis: Oscar-nominee Barbara Hershey (the INSIDIOUS series, BLACK SWAN) stars as Carla Moran, a hard-working single mother whose life becomes a nightmare when she is attacked in her bedroom by someone – or something – that she cannot see. Disbelieved by her friends and dismissed by skeptical psychiatrists, Carla begins to lose her grip as she is repeatedly attacked in her car, in the bath, and even in front of her children. Could this be a case of hysteria, a manifestation of childhood sexual trauma, or something even more horrific? Seeking help from a group of daring parapsychologists, Carla will attempt an unthinkable experiment: to seduce, trap and ultimately capture the depraved spectral fury that is THE ENTITY.

Extras:
THE ENTITY will be available at most Blu-ray retailers on Tuesday, June 11th and should cost between $25 - $28! Get your copy of this supernatural rape-fest now from AMAZON, BULL MOOSE, DIABOLIK DVD, or directly from SHOUT! FACTORY (which also comes with an 18 x 24 poster of the new cover artwork)! 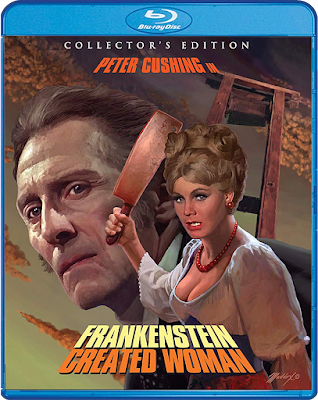 Synopsis: She's a vision of loveliness ... with a murderous mission from beyond the grave!

In this "most conceptually wild and outrightly science-fictional of the Hammer Frankenstein films" (Moria Science Fiction, Horror and Fantasy Film Review), Baron Frankenstein (Peter Cushing) and Dr. Hertz (Thorley Walters) are embarking upon an experiment to capture the souls of the dead and impose them into other bodies. When their assistant, Hans (Robert Morris), is unjustly accused of murdering his girlfriend Christina's father and is himself put to death, the two men claim his body and trap his soul in their laboratory. Meanwhile, Christina (Susan Denberg) is consumed with grief over the death of her beloved Hans and commits suicide.

Frankenstein and Dr. Hertz are able to transfer Hans' soul into Christina's healed body, which results in a vision of beauty. Their experiment appears successful until Frankenstein discovers that Christina's seductive appetites are being driven by the spirit of Hans and his passion for revenge ...

Extras:
It's great to see another Hammer Horror title make it to Blu-ray! (Even better? There are a lot more coming later this year!) Scream's Collector's Edition of FRANKENSTEIN CREATED WOMAN arrives on Blu-ray on June 11th at most Blu-ray retailers, and should cost between $25 - $28! Add this classic Horror titles to your collection now by ordering it from AMAZON, BULL MOOSE, DIABOLIK DVD, or directly from SHOUT! FACTORY (which will also net you a cool 18 x 24 poster featuring this disc's new artwork)! 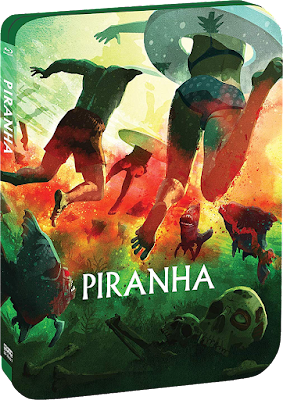 Synopsis: While searching for missing teenagers, novice skip tracer Maggie McKeown (Heather Menzies) and one of the locals, town boozer Paul Grogan (Bradford Dillman) stumble upon a top-secret Army laboratory doing genetic research on piranha fish for the purpose of developing biological warfare. When they are accidentally released from the compound, the deadly school of eating machines head downstream and eat everything, and anything, in their path.

Just when you thought it was safe to go in the river ...

PIRANHA features a stellar group of talent in front of as well as behind the camera. The top-notch cast of cult stars includes Kevin McCarthy (INVASION OF THE BODY SNATCHERS), Barbara Steele (BLACK SUNDAY), Belinda Balaski (THE HOWLING), Dick Miller (A BUCKET OF BLOOD), Paul Bartel (EATING RAOUL) and Richard Deacon (The Dick Van Dyke Show).

Extras:
Ugh, I really hate to double-dip but the new Corman commentary and 4K transfer (and gorgeous new artwork) are admittedly very enticing! Scream Factory's Limited Edition Steelbook is also available on the 11th and goes for between $20 - $25. Get it now from AMAZON, BULL MOOSE, DIABOLIK DVD, or from SHOUT! FACTORY (especially if you want the exclusive lithograph)!