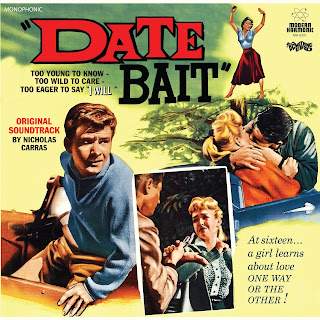 With the revitalization of vinyl records, I guess it was only a matter of time before somebody dredged up some tunes from cautionary tales of teenage rebellion! On August 23rd, 2019, Modern Harmonic (teaming with Something Weird Video) is releasing the soundtracks to DATE BAIT and HIGH SCHOOL CAESAR! So if you're a fan of movies about the dangers of teenage angst, and you also happen to collect records, then these two highly collectible LPs will be right up your alley!

Soundtrack Info: Nicholas Carras’ powerhouse score for this angst-filled flick is a tapestry of sounds from fast, jazzy pieces, dark and suspenseful moments, breezy traveling music, and the optimistic ending. The soundtrack also features the earworm of a title cut that will have you pappa do do wah-ing along.

Details:
Film Synopsis: (From Wikipedia) Two confused teenagers are in love and want to get hitched, but their uptight parents say "no way!" The couple finds themselves on the sleazy side of town, where they are victimized by the new bride's hoodlum ex-boyfriend and his psychotic drug-addicted brother! The teens must also contend with other assorted criminals, including drug dealers and mobsters! 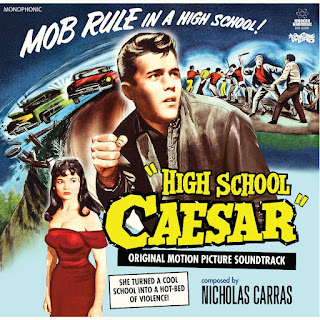 Soundtrack Info: The true star of HIGH SCHOOL CAESAR is its dark and tense compositions, and wild, bongo-driven percussion of the Nicholas Carras score! This soundtrack collects three rare, blistering rockers featured in the film, and delinquent lines of dialog from the harrowing tale along with the prime cuts of the score!

Details:
Film Synopsis: (From IMDB) Matt Stevens is the big man at high school. He sweats the students for protection money, acquires copies of tests for a fee, and has rigged the votes so he can beat Kelly in the election for student president. Aside from his anointed acolytes, Matt is almost universally despised. His parents are obscenely rich and spend their time traveling in Europe rather than giving him the parental guidance he needs. Things begin to get ugly when some of the teens resist his power and show Matt up at a drag race.


As stated earlier, these two LPs from the glorious power triad of Modern Harmonic, Something Weird Video, and the Nicholas Carras estate, will be available on August 23rd! Both releases are priced at $24.98, and will be available through Modern Harmonic's website and Amazon.com! I think this is a really cool and unique idea, and here's hoping that these releases gather an audience so we get more b-movie records in the future! Speaking of which, also be on the lookout for LP/DVD releases for two more Something Weird oddities/obscurities, namely SPACE THING and MR. PETER'S PETS!